I never thought I’d live to tell this tale.

It all started back when I was but a tiny little pod growing up in my native Mexico.

I had a peaceful childhood: lazy summer days just hanging about with all my friends; hot nights resting under the moonlit sky; and a swirl of languages giving me my first taste of the possibility of life beyond my beloved Atlantic Ocean.

The memories still haunt me yet at the same time, bizarrely, blanket me with a strange kind of solace. Because to this day, I can’t quite figure out how I ended up here.
I mean, I know how it happened but I guess I just can’t believe it.

You see I’m a chocolate. 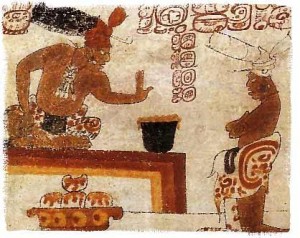 Chocolate is not only one of the world’s most popular foods, but also one of the oldest. It has been cultivated for millions of years from the cacao tree by the peoples of central and south America, particularly the Mayan and Aztec civilisations.

During this ancient period of chocolate’s fascinating history it was consumed primarily as a beverage.

The hard cacoa beans harvested from the cacao tree were ground down and mixed with water to create a frothy bitter drink which was then consumed.

Archaeological findings from these areas also reveal that the white pulp around the cacao bean could also have been used as a source of fermentable sugars that were placed in alcoholic beverages too.

However, to these ancient civilisations chocolate could be more than just beverage, as hieroglyphics and images reveal that chocolate often held an important place in religious rituals and ceremonies.

Chocolate found its way into the palettes of other cultures with its introduction to Europe in the 16th century. After the discovery of the Americas by Europeans, primarily the Spanish and Portuguese kingdoms, the cocoa bean was brought back to the Old World by explorers and merchants, along with the other riches of the Aztecs and Mayans such as gold.

Even in this new European context, chocolate was used for more than just food consumption. Chocolate straddled the border between food and medicine. 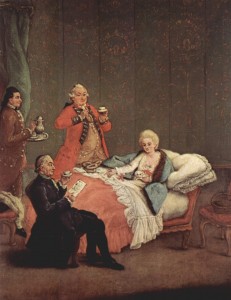 This was clearly illustrated in cookbooks which emerged during these centuries (some published, others handwritten and passed from mother to daughter) whose sections encompassed medicine, confectionary and cooking.

Chocolate  and cocoa was subsequently used in home remedies by women to cure a variety of ailments and illnesses.

As the centuries progressed however, the uses of chocolate in Europe became much more food related.

By the eighteenth century, the drinking of chocolate was once again ritualised and became part of European social practises.

Just like English tea rituals, chocolate was consumed in coffee houses by men and in the home by women in both formal and informal social settings.

I didn’t plan on becoming a chocolate.

After a few processes that I dare not repeat, I was magically transformed into what I heard them call ‘cacao powder’. Then I found myself in the care of what I had imagined the very hands of divine Providence would feel like.

And before I knew it, I was caressed, finessed and moulded into a sweet piece of heaven itself.

That chocolate had my name on it.

The chocolate that is consumed today is very different from the traditional chocolate of the ancient Mayans and Aztecs peoples, and even that of the Renaissance Europeans.

Modern Europeans sweetened and fattened the recipes of these ancient civilizations, adding milk, sugar and oils to produce what we now understand to be ‘chocolate’.

At the end of the eighteenth century, the solid form of sweetened chocolate that we have today was invented in Italy and soon distributed in large quantities around Europe.

Entrepreneurs began to realise that chocolate was big business and soon family companies were established, some still recognisable today, such as the Cadbury, Nestlé and Hersheys. 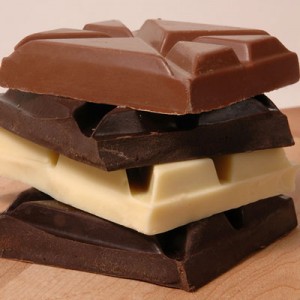 Dark chocolate results from adding small amounts of fat/oils and sugar to a large percentage of cocoa powder.

Milk chocolate on the other hand is produced from adding milk to cocoa powder.

White chocolate is completely different again as it is a chocolate derivative. It does not contain cocoa solids but rather it is produced from cocoa butter (an oil extracted from the cocoa bean), milk and sugar.

And soon, I was famous.

Today there are many speciality chocolate stores and brands around the world. Belgium in particular is very well known for its chocolate makers.

However the Australian chocolate industry has also realised the potential of these specialty stores, with large chains such as Max Brenner and Lindt, as well as smaller, privately owned and run speciality chocolate stores emerging in recent years.

These stores offer a chocolate ‘cafe’ experience where diners can order all types of chocolate related drinks and foods. These stores also create personalised chocolate gifts for numerous special occasions such as weddings, birthdays, anniversaries or Valentine’s Day.

I became loved, loved by all. Some for the right reasons and some for the wrong. What can I say? I always enjoyed being a trouble maker.

Today more than two-thirds of the world’s cocoa is produced by Western African countries including Mauritania.

In a move to stop the exploitation of workers on cocoa plantations, movements such as the Fair Trade System have begun.

In the Fair Trade system, consumers of products like coffee and cocoa beans, bananas, and sugar typically agree to pay an above market price for the products.

The extra money is intended to help the small farms and co-operatives selling the products to make lasting improvements in their communities, by going towards schools, hospitals, and other improvements in infrastructure surrounding the cocoa plantations.

NGOs such as World Vision are big supporters of this system and contain information on its fair production, trade and consumption. It is always worth while to check out sites like this to see if your favourite confectionary brand sells sustainable and fair-trade chocolate products.

So now you know the history of chocolate, the types and the do’s and the don’ts get out there and enjoy it!