Get to know Melbourne Festival 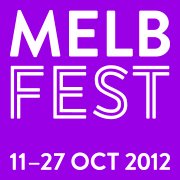 elbourne is known as the cultural capital of Australia, and for 2 glorious weeks in October there is no better place to be for all things performance and visual.

Spanning October 11-27 this year, Melbourne Festival brings together a hand-selected smorgasbord of the best in theatre, dance, music, film, visual art and more from Australia and around the world.

From humble beginnings in 1986, Melbourne Festival has gone from strength to strength over the past 26 years and now incorporates almost 20 venues right around the Melbourne CBD.

The Festival is perfect for singles, couples and families alike with events including child-friendly theatre, free outdoor events and a collection of forums touching on everything from what it means to be ‘Australian’ to up-close and personal chats with some of the festival’s most prominent artists.

If theatre is your passion, there are definitely a few extra-special acts to look out for this Festival season.

One such performance raising eyebrows on the international theatre circuit is ‘Before Your Very Eyes’, a unique exploration of the fleeting nature of youth and the inescapability of death. Performed by a group of 7 tremendously talented children, ‘Before Your Very Eyes’ is a confronting and emotional production by world-renowned theatre group Gob Squad from Germany and the Belgian arts centre CAMPO. Definitely one to add to your list of “must-sees”.

For those preferring the big-screen to the stage, Melbourne Festival is a great place to satisfy those insatiable cravings for exciting, adventurous and just plain weird foreign (and domestic) films. Featuring films from Australia, USA, South Korea, Netherlands, Iceland, Denmark and the UK, the Festival’s film program spans the full 16 days and take over various cinemas around the city.

Need a drink after looking at the extensive program?

If you’re planning on visiting Melbourne or you’re a Melbournite yourself, Melbourne Festival is one of the cultural highlights of the year, so make sure you get amongst it!