As record crowds flocked to the annual Melbourne Cup parade despite the weather and revelers stumbled home shoe-less from post-race festivities, this weeks Melbourne Cup left me wondering just what is it about this race that supposedly “stops the nation”?

Most cup-goers and happy punters see the annual spectacle as an excuse for dressing up and daytime drinking, not to mention a great excuse for a public holiday for us Victorians, but not many know the history and tradition that is behind the Melbourne Cup. And let’s be honest, not many care. I’ll keep it short with a few key facts.

The Melbourne Cup has been held since 1861, meaning Australians have been getting drunk and watching horses run in circles for a whopping 151 years.

Now held on a Tuesday, the cup was originally held on a Thursday, with the day changing to Saturday during 3 of the 5 years of the Second World War.

The field is limited to 3 years olds and older and is run over 3200m at Melbourne’s Flemington Racecourse.

Despite its place as Australia’s greatest ever racing horse Phar Lap only ever won one Melbourne Cup title in 1930, while Makybe Diva put a smile on punters’ faces an impressive 3 years in a row (2003, 2004 and 2005).

The 1985 Melbourne Cup was the first race in Australia to offer prize money of $1 million, with the winnings this year reaching a massive $6.2 million. Despite the day only being a public holiday for Victoria, the race is now broadcast to 700 million people in 120 countries.

What I find interesting is that only 34 out of 150 touted favourites have actually won the race. That’s a measly 23%!

So whether you’re choosing your bet by what the “experts” recommend or by the horse with the prettiest colours or wittiest name, it seems as though your odds of hitting the jackpot are about the same. This year, of course, was no different. 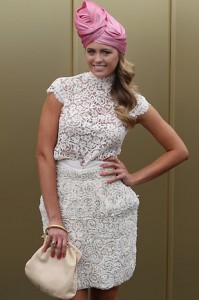 Melbourne Cup winner Green Moon was labelled an outsider with odds of 21 at the start of the race, making those who took the punt some very happy chappies indeed. Even Fiorente and Jakkalberry (in second and third respectively) surprised the bookies and onlookers alike by making the podium.

With equally as long legs and just as much pomp and spectacle as the race itself, Fashions on the Field is a highlight on the Melbourne Fashion calendar as much for its surprises as it is for its stunners.

Celebrities embarrassing themselves on the global fashion stage this year included Australian actress Pia Miranda showing up in her pyjamas and former Miss Universe Australia Jesinta Campbell struggling to pull of the Genie-turban look.

Other  “highlights” of this year’s festivities included a special guest appearance by Prince Charles and Camilla, and Marissa Cooper from the OC, oops, I mean Mischa Barton, arriving by helicopter (is she even famous anymore?).