On the 5th August, 2010 the world became aware of the San Jose mining accident that occurred in the Atacama Desert, Chile.

The ensuing reports told the world that 33 miners had been trapped 700 m (2,300 ft) underground approximately 5 km from the mines entrance.

The miners ranged in age from 19 to 63, some with decades of experience, others with their life just opening before them.

At the time of the accident the miners had emergency supplies to last 2 – 3 days.

Initial assessments gave them only a 2% chance of survival.

For the next 2 weeks the world waited as probe after probe dove deep into the Earth seeking any signs of life. On day 15 a probe arrived at the miners anticipated location and returned unanswered.

Two weeks after the accident still no sign of life had been confirmed. 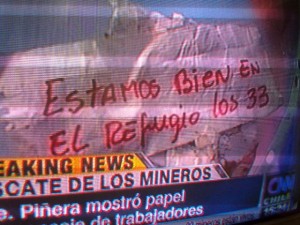 Finally, on day 17, over 2 weeks after the accident, a probe brought back the first contact with a note that read:

Translated it read “We are well in the shelter, the 33”.

This first contact elated the world, inspired the rescuers and gave hope to a full recovery of the lost 33 miners.

“Los 33” became the motto for the rescue attempt and so began an international effort that spanned continents, with government agencies and private enterprise throughout the world coming together for an act of extraordinary teamwork.

It was not until 52 days later, more than 2 months following the accident, that the first miner emerged relatively unscathed and without any major health issues.

This accident produced an extraordinary account of global teamwork with countries throughout Latin America, South Africa, Australia, US & Canada all rallying behind the single purpose of releasing “Los 33”.

This post introduces a series on four steps to extraordinary teamwork and how to achieve extra ordinary accomplishments over all the noise and distractions that plague our daily lives.

In the case of “Los 33”, there are literally hundreds of stories that capture a spirit of overcoming all the odds to achieve a single purpose.

The hope of this series of articles is to capture four steps that we can use to harness extraordinary teamwork within our own businesses and projects. 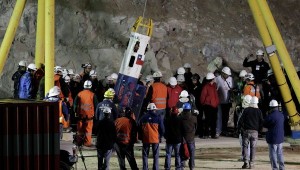 When the first miner emerged from the rescue pod on October 13th, 2010, an estimated 1 billion people watched as the global media broadcast the message far and wide.

Literally thousands of people had participated in the rescue all rallying behind a single purpose of releasing 33 miners.

This feat could only be achieved through extra ordinary teamwork and a willingness for the many to focus on the one.

The next article will focus on step 1 to achieving extraordinary teamwork.