While it might not be the first thing you think about when you’re looking for a place to rent or buy, but access to transport can make all the difference when it comes to living in Sydney.

Transport in the big city and surrounding suburban areas continues to be a hotly contested issue, especially amongst commuters. 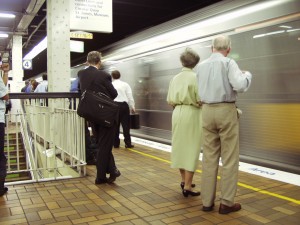 Living on the fringes of the city has its advantages – one of them being that it takes just 10 minutes by train to reach the city centre, with trains arriving every 15 minutes.

Of course, that’s only during peak commuting hours, when you’ll have to put aside your personal space and keep your arms by your sides to avoid smacking someone in the face.

If perhaps you’d like to be able to breathe or maybe even sit down on your journey, you’ll have to wait until off peak hours, when trains only come every 30 to 45 minutes.

Earlier this year, the results of Sydney University’s quarterly Transport Opinion survey revealed that crowding on trains topped the list of complaints about Australian, and particularly Sydney, trains … it even beat travel time and fares.

Sydney buses never seem to cop as much flack as Cityrail, whose delays and service outages are followed by an onslaught of angry tweets and Facebook statuses.

Perhaps it’s because less people use buses, or maybe they really are more reliable.

Sydney Buses pioneered a SMS texting system, Real Time Bus Information, in recent years, where passengers can send off a message and get an instant reply detailing pretty accurate estimates of the next bus arrival.

While the arrival times aren’t always 100% correct due to traffic, this system at least lets you know if you’ve got time for another beer before the next bus arrives – a convenient tool which a lot of commuters seem to appreciate.

For those of us living just a few kilometres from the city centre, transport may seem a constant battle, but it’s nothing compared to the surprisingly isolated surrounding regions of Sydney’s east, west, north and south.

The Sydney Alliance, a citizens coalition, recently released maps showing greater Sydney areas which are total black holes when it comes to transport. These are areas without the choice of either bus or train within reasonable walking distance. They’ve suggested something which could really make a difference – 400:15:1 SCA2. Translated from algorithm to English, that’s transport within 400 metres, arriving every 15 minutes and using a 1 ticket system, as well as being safe, clean, affordable and accessible.

It sounds great in theory, but can the algorithm become a reality?

Tell us about your experiences and what direction you think Sydney transport needs to move in.