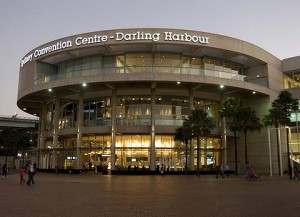 Tucked away on the western fringe of the CBD, Darling Harbour began as a commercial port and it wasn’t until the 1980s that it was re-developed into a pedestrian paradise. A far cry from its railway depot infancy, Darling Harbour blossomed into an attraction for tourists and locals alike, boasting Sydney’s Chinese Gardens, the Powerhouse Museum, Sydney Aquarium and my personal childhood favourite, SEGA World.

However as most of the area’s development occurred almost 3 decades ago, the bustling city fringe harbour doesn’t quite meet its full potential.

Luckily, the NSW government has come to the same conclusion and enlisted some of the country’s brightest, boldest architects to re-envision Darling Harbour.

The project will be supported by a ludicrous $1 billion budget and it seems that the government is in for a penny, in for a pound – or at least you’d want to hope so with that much money on the line.

The extensive make over, including new convention and exhibition centres, extended outdoor event spaces, apartment buildings, a 900 room hotel, businesses, restaurants and more, is already underway and expected to be completed by 2017.

While the government estimates the redevelopment will have significant economic benefits for NSW, I’m more excited about the fact that it could mean an exceptional, exciting new space for our rapidly evolving city.

Whether it’s the outdoor cinema that will make the perfect first date, the flourish of green open spaces merged with cutting edge architecture or just another place to head for a night out, the Darling Harbour redevelopment holds something for all of us.