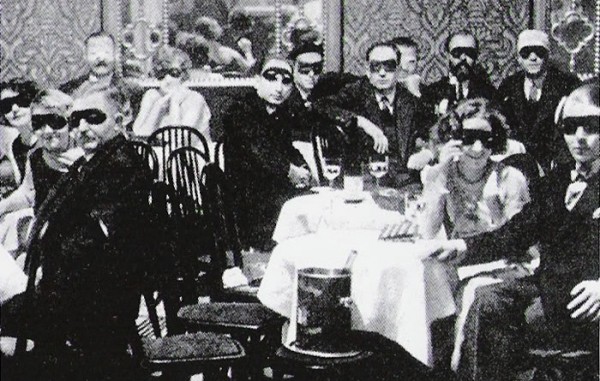 Spiegeltents (Dutch for “Mirror Tents”) were large wooden travelling tents that originated in Belgium during the late nineteenth century, and soon became popular entertainment venues during the early twentieth century. They were made from wood and canvas and were designed to be pulled down and moved. They were mostly utilised as travelling entertainment saloons, but at times were also used as bars and dance halls. 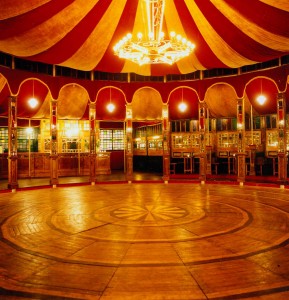 After the end of the First World War the western world saw an economic boom which was marked by increased earnings and therefore increased spending on leisure activities including entertainment. As the middle class grew more money was spent on the middle class entertainment that the spiegeltents provided and therefore its popularity grew, peaking in the 1920s and 1930s.

With their lavishly carved wooden interiors that were covered in mirrors, their stained glass windows, velvet and brocade upholstered seating booths and their old-style bars, spiegeltents reveal the decadence of an era long gone. It’s easy to imagine what they would have been like in their heyday: dark smokey entertainment venues where people of all ages went to view light entertainment such as vaudeville and cabaret, whilst later in the night others went to indulge in the pleasures of burlesque.

Of course, for many years lower and middle class people had had access to the theatre, comedians and other forms of live

entertainment, but what defined a vaudeville show was its variety: usually it contained many separate and unrelated acts that were grouped together on a common bill for that night. These acts would be presented by a comedic host and sometimes run all day – running up to twelve hours in total!

Vaudeville in the nineteenth century was characterised by its focus on the middle class rather than the rowdy working class, mixed gender audiences and its usually alcohol-free venues. However as time went on vaudeville also led to acts which idealised and sexualised the female figure with female performers encouraged to wear tight or revealing clothing- turning the female body into a sexual spectacle that would later define twentieth century burlesque.

Cabaret was a form of entertainment that was also popularised in the nineteenth century and would go on to find fame during the roaring twenties. Owing its origins to France and Germany, cabaret was similar to vaudeville but was separated mainly by the types of acts it hosted and the venue they were performed in.

Cabaret featured entertainment from performers such as musicians, poets, comedians, dancers and actors which were all introduced by a master of ceremonies (MC). Unlike vaudeville which was usually performed in a concert hall environment, cabaret was 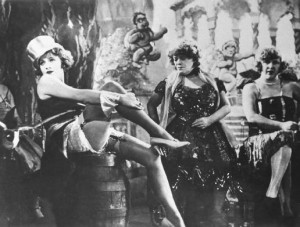 characterised by its intimate nightclub setting in venues such as restaurants, bars and pubs. The French word ‘cabaret’ initially referred to any business that served alcohol, however it would later come to define the entertainment provided in these establishments. As the performer was on stage, audience members sat at tables around the stage drinking or eating. The closeness of the performer to their audience meant that cabaret was also a very personal experience. Inevitably the closeness of audience members meant that they often became part of the show.

During the 1920s Jazz music, loose morals and artistic expression came to characterise cabaret. It was the hub of a rich artistic culture and for movements such as art deco, especially in the Weimar Republic era of Germany before WWII. However this outlet for artistic and political expression, as well as nightclub setting which encouraged late nights and booze meant that cabaret was often met with opposition in prohibition USA and censored in countries such as Germany for the radical satire and acts of protest that their performers presented.

In modern times it has been immortalised in films such as Liza Minnelli’s Cabaret and the musical Chicago.

In its early history, Burlesque literally referred to any type of creative work that lampooned or caricatured more serious works or 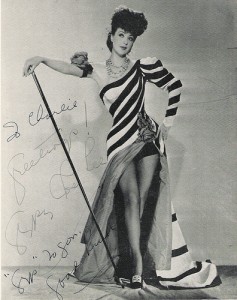 topics to cause laughter. It was originally characterised by its fusion of high and lowbrow humour that mocked social mores and social structures. However during the early twentieth century the term came to be used to describe shows in a variety format that featured adult entertainment such as bawdy comedy, dancing girls and female stripteases.

Although you may have heard some refer to Burlesque dancers as simply ‘classy strippers’ there was in fact much more to a burlesque act than one might usually associate. Burlesque striptease was in itself a type of performance art. These women often wore elaborate and colourful costumes and used props such as feather fans in their acts. Each act often followed some sort of storyline or theme, and these costumes and props were coordinated appropriately. Although these women performed a ‘striptease’ how much they could show was highly regulated and many women were often fined or arrested by police for flashing too much skin.

The most important thing for any burlesque dancer was to have a gimmick, as each gimmick defined that dancer’s act and made her stand out. American Burlesque queens such as Gypsy Rose Lee combined their witty humour and comedic talents with the stripteases, whilst others such as Zorita had snakes which she would dance with on stage.

The End of an Era: The Demise of Spiegeltents

Whilst the Buggles once claimed that video killed the radio star, it’s fair to say that advent of cinema and television and its increasing popularity in the 1950s sealed the fate of the spiegeltent as well as the industries that it supplied – vaudeville, cabaret and burlesque.

Travelling entertainment which reached small country towns and villages was no longer needed as cinemas were built and television was beamed into households around the world.

However, recently Spiegeltents have made a comeback. With the 21st century nostalgically turning its eyes back to the eras of art 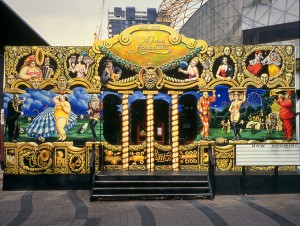 nouveau and art deco, the roaring twenties and vintage fashions all the forms of entertainment that come with these eras such as cabaret, burlesque and vaudeville have been revived.

There are many spiegeltents that have been restored and are now used across the world as part of artistic and cultural festivals. One such tent is the ‘World Famous Spiegeltent’ – one of the most lavishly decorated tents ever known. It was constructed in Belgium in the 1920s and consists of over 3000 pieces which are painstakingly taken down and re-erected as the tent is moved around. In fact this spiegeltent is most famous for housing acts such as German actress/singer Marlene Dietrich who famously performed in it in the 1930s.

Although the heyday of vaudeville, cabaret and burlesque may be over Spiegeltents such as those still in use continue to tour across the world bring these old forms of entertainment and their beautiful surrounds to generations of new admirers.

The ‘Famous Spiegeltent’ is currently being used as part of the Sydney Festival during January 2013, housing acts ranging from modern musicians to circus performers. The Spiegeltent ‘Salon Perdu’ is also being used as a venue in Parramatta as part of the festival. The Arts Centre in Melbourne will also play host to these Spiegeltents throughout February and March where a wide variety of cabaret and burlesque acts are also scheduled.

Check out the Sydney Festival and Melbourne Arts Centre for more information.