Easter. That’s the holiday where you eat so much chocolate and so many hot cross buns over a four days period that you can barely walk, right? Easter nowadays is all about chocolate and a creepy bunny that enters children’s homes at night and leaves them chocolate as gifts (sounds like the start of an interesting crime thriller doesn’t it?) however this was not always so.

Although Easter is primarily a religious holiday found on the Christian calendar, the history of Easter and its traditions are actually more interesting and complicated then most people would think.

The Three Religious origins of Easter – Judaism, Christianity and Paganism

Easter is a four day religious festival that celebrates the resurrection of the Christian figure Jesus Christ who rose again on the third day after his crucifixion by Roman soldiers at Calvary, as described in the New Testament of the Bible. 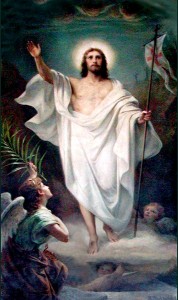 However, the Christian origins of Easter actually date back to before the birth of Christ and were derived from the Jewish Passover, a holiday with which it still shares much of its symbolism, traditions and date.

After the death of Jesus Christ, and as Christianity began to spread throughout the Middle East, early followers began to celebrate the death and resurrection of their Messiah whom they believed to be the son of God. Many of these followers were certainly aware of the Jewish calendar (as many of them were originally Jewish) and as the death of Christ was around the same time it is believed that these new believers simply celebrated the resurrection as an extension of this original Passover festival which celebrated the shared Jewish and Christian figure of Moses who liberated to Israelites from Egyptian rule in the Torah and Old Testament.

By the second century AD it appears that this new festival had become a yearly celebration all of its own by followers of the new religion.

Although the religious Abrahamic origins of Easter is what it is most well known for by modern believers and non-believers alike, many aspect of the Easter tradition were actually derived from the pagan traditions of Europe.

The Easter Bunny and Easter Eggs

It is well known that as Christianity spread and was adopted by countries, such as the Roman state in the fourth century AD, that pagan traditions were slowly adopted into new religious traditions. This was the make the transition from old religion to new religion easier.

In fact many ancient pagan religions also celebrated death and rebirth, and this was very much the case with the poly-theistic religion headed by Jupiter and other famous gods, which the Romans still worshipped before their adoption of Christianity.

As many of these religious already had a concept of death and rebirth associated with many gods or religious figures of their own, naturally certain traditions and acts were simply transferred over and took on new or similar religious meanings.

This is most easily seen in the prevailing tradition of the Easter Bunny and Easter Eggs – both of which were Northern European Pagan traditions.

The English word ‘Easter’ is actually derived from the Old English word Ēostre which historians believe originally referred to the name of an Anglo-Saxon goddess of the dawn who was celebrated by Germanic peoples across Northern Europe.

This great northern goddess’ symbol was the rabbit or hare, a symbol of fertility due to their large litters in the dawning spring, when it is recorded that festivals were held in her honour. However by the eighth century at the time of his writing, Bede records that her celebrations had died out with the Christian conversion of the Anglo-Saxons and was now replaced by what the Anglo-Saxons called ‘Eostur-monath’ ‘(Easter).

As Ēostre’s spring traditions and celebrations were slowly converted into a Christian festival so too were her symbols: rabbits came to represent the Virgin Mary or the Holy Trinity in Medieval Christianity. By 1682 the tradition of a hare bringing eggs at Easter was recorded in the Alsace region of France by Georg Franck von Franckenau. It is believed that the first edible ‘Easter bunny’ was made in Germany during the 1500s, not from chocolate but from sweet pastry.

The origins of the Easter Egg follows a similar story. Eggs were a pagan symbol of fertility and re-birth in both the pagan religions of Europe and the Middle East. Eggs were often given away as gifts at the beginning of spring to celebrate the upcoming fertility of the land. 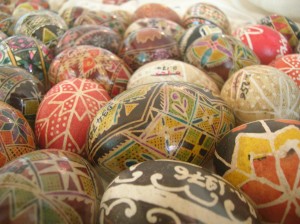 remembrance of the crucifixion of Christ. In Orthodox and Eastern European traditions, eggs are still dyed red to symbolise this. They are then blessed by priests and given to the faithful.

For most of European history it was simply decorated eggs that were given as gifts at Easter. Often these decorations were very elaborate, and games were even devised around Easter eggs, many which still survive today such as egg hunts.

The modern commercialisation of Easter in the form of Chocolate Rabbits and Eggs was lead primarily by the USA in the nineteenth-century, when hundreds of German settlers, who had retained these traditions from their Northern Germanic ancestors, migrated to the country.

So whether you celebrate Easter for its religious significance or simply for the chocolate, know that you are taking part in a festival that has had a variety of meanings, for a variety of cultures over a period of thousands of years – and that’s an excuse to eat more chocolate if ever there was I say!