It seems that pop culture is obsessed with the early decades of the twentieth century. Whether it be in entertainment such as

Downtown Abbey, Boardwalk Empire and the much anticipated upcoming Great Gatsby film, or even the 100 year anniversary of historical events such as the sinking of titanic in 2012, people are nostalgically turning their eyes to the first three decades of the 1900s.

Whether it’s the fashion, the inventions or the social and economic, and political upheaval of this period of time that fascinated you all these things were influenced by or reflected in two very influential and contrasting movements which characterised the beginning of the 20th century: Art Nouveau and Art Deco.

Whilst the phrases Art Nouveau and Art Deco refer mainly to two specific movements in art, what began in art slowly began to filter throughout society and influenced every facet of daily life – from the buildings people lived or worked in, to the clothes they wore, the entertainment they viewed and even the advertisements they saw. Each movement was very specific in its portrayal of the world, and like all good artistic movements, life and art began to imitate each other.

Art Nouveau was a movement that flourished between 1890-1914. More than just an artistic movement, it was also a philosophical, architectural and decorative development that came to define the visual and cultural landscape of the turn of and beginning of the twentieth century.

Art Nouveau was characterised by free flowing and curved lines inspired, in part, by botanical studies and illustrations of deep-sea organisms.

The movement was also influenced by Japanese art which flooded the western market, mainly in the form of prints and fabrics, after trade was established with the country during the 1860s.

The very style of this movement inspired a generation of artists who sought to break away from past neo-classical styles of art, and encouraged a return to handicraftsmanship and traditional techniques which produced the beautiful wood-carved furniture of the movement, to name just one example.

This new style of art which mixed together old and new also reflects the social environment in which this movement was created and functioned. Art Nouveau was in many ways a response to the industrial revolution where the old ways of doing things began to clash with the new technologies and techniques. Old customs and artistic styles sat alongside new, combining a wide range of contradictory images and ideas – many of which are found in art nouveau and its different variants. The way that artists took up the style or rejected it reflects the way that the movement influenced society.

Some artists deplored the movement and some embraced it, much like wider society where older generations still tried to hold onto 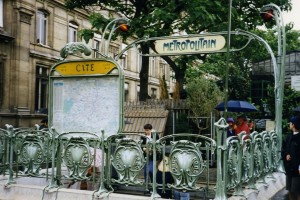 the past in a rapidly evolving world, whilst younger generations began to embrace change.

Whether loved or hated, Art Nouveau firmly established itself as the new decorative style of the twentieth century at the 1900 World’s Fair in Paris – a city where its influence is still felt today in iconic architecture such as the entrances to Paris’ metros. Possibly the most famous and most recognisable artist from the Art Nouveau Movement is Alphonse Mucha, who was a Czech painter and decorative artist. Many of his famous works were produced for products such as Moet Champagne & Chandon or Job Cigarettes, and are now available in many poster and art print stores.

By the beginning of the First World War Art Nouveau had all but fizzled out. However a new and exciting Art Movement which influenced design and technology up until the 1940s began to emerge, this movement was called Art Deco. 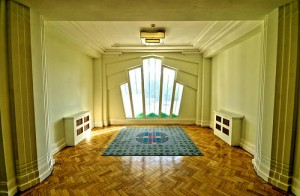 By the mid- nineteen twenties much of the western world’s economies were booming and the decadence of the ‘roaring twenties’, the notion most nostalgically associated with this era, and portrayed in books and films such as The Great Gatsby, began to emerge. The glamour associated with this era was reflected in and created by the design movement of Art Deco.

The influence of Art Deco is still most noticeable in architecture where its design elements reflected the power and wealth of the West.

As the cities of the modern world were being built, they were constructed in the style of Art Deco. Whilst Art Nouveau architecture 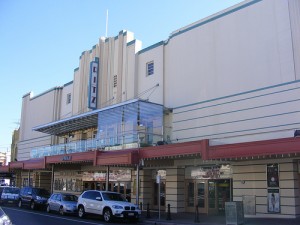 was characterised by asymmetrical shapes, the use of arches and curved forms and stained glass, Art Deco architecture ultilised

symmetrical shapes, rounded corners on buildings as well as geometric forms such as polygons, rectangles and trapezoids. The building materials used were also modern materials like aluminium, stainless steel and plastics.

The Empire State Building in New York is probably one of the most lavish examples of Art Deco architecture, whilst cinemas and pubs built in Sydney throughout the era, such as the Ritz Cinema in Randwick Sydney, are more humble examples.

So next time you’re walking down the street, buying clothes, decor or even antiques take note of how these two very influential art movements which visually and culturally helped to define the early twentieth century are still influencing our taste and style today.