ANZAC day has just been, Remembrance Day is only a few months away and with the 100 year anniversary of the start of the First World War looming,  Digital Editions takes a look at how WWI changed not only politics but how it led to the emergence of the modern world.

The Emergence of a Modern World: Political Impacts 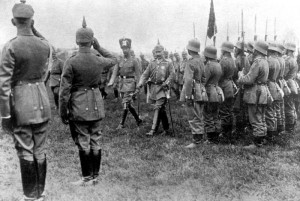 The horrors of the trenches changed people’s attitudes towards the traditional rule of European monarchs whose governments were comprised almost entirely of the gentry. As the war dragged on many men, from all classes, began to resent not their enemy soldiers but the stupidity and greed of the European governments who had sent them into the trenches with such a catastrophic loss of life for so very little gain.

This feeling was further fuel by severe military blunders such as the Battle of the Somme and the Gallipoli Campaign where the decisions of upper class commanding officers who were unprepared, stubborn and unaccustomed to the realities of modern warfare, led to the deaths of thousands of men (nearly 20,000 British soldiers died on the first day of the Somme Offensive). They soon began to be viewed as inept by their soldiers, their position a result of class affiliation rather than military prowess.

Whilst the war left some disillusioned with their governments and commanding officers, one of the most significant political impacts of the First World War, and one which signalled a turn towards modernity in Europe, was the end of imperial power. By the end of the war four major European imperial powers – the Russian, Austro-Hungarian and Ottoman Empires – ceased to exist, and Germany was left in massive debt from the war repatriation bill enforced on it at the Treaty of Versailles in 1919 and without a monarch. 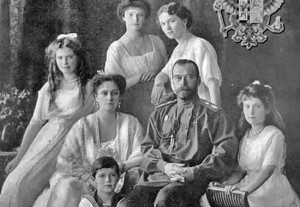 After their defeat in 1918, the Austro-Hungarian empire dissolved, and many groups within the empire gain their freedom and autonomous rule forming countries such as Slovenia, the Czech Republic, Bosnia-Herzegovina and Serbia.

The Ottoman Empire, who fought Russia to the North, the Commonwealth, American and French forces from the west and other Arab countries such as Syria and Yemen to the east, was similarly dissolved after the central powers defeat in 1918.

The Russian case was probably the most extreme and resulted in the Russian Revolution of 1917 where Tsar Nicholas II abdicated after his many military failures during the war and the economic situation caused by the demands of war on the home front led to uprisings. By August 1917 Tsar Nicholas II along with the entire royal family were brutally murdered and a communist government led by Vladimir Lenin, who had gathered the support of the predominately lower class and peasant population of Russia, was instated. 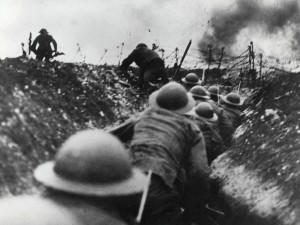 By the end of WWI the entire fabric of the world had changed. The horrors of war and demands of the home front prompted people to question the rigorous social and moral values of the preceding Edwardian Era. The youthful optimism of those who had just lived through one of the most influential and devastating events of the twentieth century was reflected in these beginnings of social emancipation from Victorian and Edwardian restrictions on class, wealth, morals and gender attitudes.

Death in the war did not distinguish between class – upper, lower and middle class men all fought and died together. Once back at home it was hard for many men who had fought in the war to go back to the master-servant type relationship with those whom they had fought alongside. In comparison to the horrors that many had endured on the battle field, the emphasis on class seemed trivial and of little significance. Although social change in countries such as England was slow the war had set in motion the wheels which slowly began to break down the rigorous social classes that had existed for nearly a millennium.

Back on the home front rationing and other restrictions meant that many class boundaries often had to be temporarily removed in order to contribute to the war effort. For example, many aristocratic homes such as Highclere Castle in England were used as a military hospitals, housing soldiers from all classes.

The roles of women at home suddenly widened. Many women became military nurses, but many more found work in mostly male occupations such as munitions factories, ship building and engineering industries. Women’s changing attitudes towards their gender roles was reflected in their clothing and a youth androgynous look was favoured – hair was cut short and clothing created a boyish shape to the body. 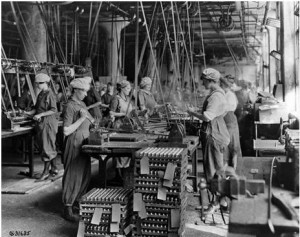 Whilst women in Australia and New Zealand had the right to vote (and had so for many years) women in Britain and the United States did not. The roles that women had to take on during the war fuelled the suffragette movement and challenged traditional values which limited women to domestic spheres. Suddenly the voices of women were too loud to ignore and British women were eventually given the vote in 1918 (with limitations), whilst American women were offered the right in 1920.

The nostalgic notion associated with the ‘happy-go-lucky- and partying attitudes of the 1920s in countries such as the United states and Germany, particularly Berlin, can also be attributed to the horrors of warfare that many had endured and the wish to enjoy life afterwards.

One consequence of WWI that had an enormous impact on the world from India to America, from the western front in Europe to the home front in Australia, was the Spanish Influenza pandemic of 1918-1920. Surprisingly however very few people know about this influenza pandemic which is now believed to be the worst pandemic the world has ever seen, killing more people in 24 weeks than the Black Death killed in 100 years. Globally it is estimated that around 50-100 million people died (3-6% of the entire population), from Ethiopia to Japan, and Alaska to the Samoan Islands.

The fact that so many people still know so little about this pandemic is probably due to its association with WWI, as it was severely censored on the home front by governments that were already struggling to keep morale high. The virus was colloquially named ‘Spanish Influenza’ due to the fact that its impact was not censored in neutral Spain as it was in the countries involved in the war, which led many in those other countries to believe that it had originated there. 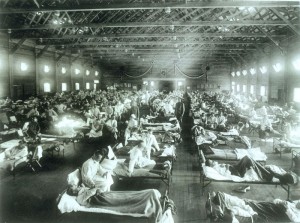 It is now known however that this flu pandemic originated in the trenches of the Western Front in France near the transit hospital camp of Étaples where soldiers acquired the virus from the poultry and swine with which they shared close proximity.

The flu spread fast and killed fast. It is believed that the severity of this particular flu virus was a result of two separate factors: the movement of people caused by war and the type of H1N1 itself.  In normal circumstances those who get sick with viruses such as the flu usually stay at home thus keeping the spread of the virus at bay. However in the midst of WWI and its end this process was reversed. Rather than keeping sick men in the trenches they were shipped out to crowded hospitals that were set up all around Europe and the home front. Thus the virus was spread to civilians and other soldiers at an unprecedented rate. Little effort was made at the beginning of the pandemic to quarantine returned soldiers as no one wanted to keep these men, who had already endured the horrors of the trenches for years, from seeing their families. It is also suspected that the weakened immune system of many soldiers due to malnourishment and the conditions in which they lived in the trenches may have led to a more severe strain of the virus to emerge than may have otherwise. 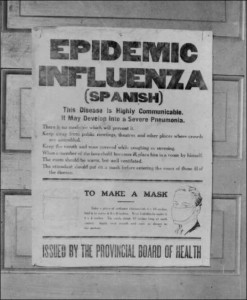 The second contributing factor was the very nature of the virus itself. Unlike most flu viruses that target the very young and the old, the Spanish Flu mostly killed young and healthy people. This is due to what scientist have labelled ‘cytokine storms’ – an often fatal immune response to infection. Normally when the body fights infection, cytokines (small signalling molecules that ‘tell’ cells what to do) signal the body’s T-Cells (types of pathogen fighting white blood cells) and macrophages to travel to the site of infection and fight it. The severity of the Spanish Flu virus prompted an uncontrolled reaction in this process, causing the infection fighting cells of the body to over produce at such a rate that it actually damaged tissue in the body and inhibited its ability to fight off infection. Thus during the Spanish Influenza pandemic the stronger a person’s immune system the more at risk they were of developing these cytokine storms as the body tried to fight off infection.

For countries such as England, France, Germany and Russia who had already endured the loses of a large amount of young men, the Spanish Influenza was yet another blow, as young children, women and more men began to die at alarming rates.

Nothing changed the political and social landscape of Europe and the world as dramatically as the First World War did. Millions of lives were lost from the consequences of front line battle or the resulting diseases such as the Spanish Influenza that were brought back from the Western Front. The rigorous social fabric of the world which predominately measured one’s position in life by the social class and gender into which they were born was slowly starting to unravel as the horrors and the demands of war meant that traditional boundaries needed to be transgressed. Just as Europe’s old world powers fell apart so too did old world thinking and slowly Europe and the world began to adopt new ways of thinking, new laws and legislations (such as women’s right to vote) as well as new technologies that would see the twentieth-century become the most socially, politically and economically progressive times in history.