If you’re short of something to do after 6pm in the city for the next few weeks, take a stroll down to harbour to check out the curiously wonderful entity that is Vivid Sydney.

Lighting has come a long way since the kerosene lamps of the 19th century and with similar advancements in digital imaging and technology such as lasers, a man made light show is not something to be missed.

With rolling choreography of lighting and projections, Vivid Sydney is a festival of light like no other.

The atmosphere Vivid creates is totally unique and will capture your attention and imagination for hours at a time.

As well as acting as a spectacular backdrop for some of Vivid’s greatest projections, the Sydney Opera House also plays home to Vivid LIVE, with a stellar run sheet of performances from both local and international artists.

From the State Library to the Museum of Contemporary Art, Vivid Ideas Exchange offers you a plentiful mix of ideas – from photography lessons to creative business strategies and much, much more. 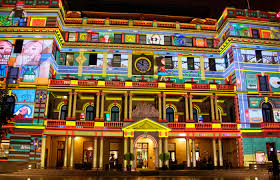 With nearly all events at the Vivid festival being free of cost, there are no excuses for staying home!

While the light element of Vivid is restricted to the evening, Music and Ideas events run throughout the day, with plenty of activities suitable for all ages and interests.

Whether you’re looking for something to do with the kids early in the evening, or you’ve got some time to kill before a night out in the city, the Vivid light show is the perfect time filler – the lights will be there as long as you want to be.

You can keep up to date with what’s on every day during the Vivid festival using the Vivid Sydney App, available from iTunes and Google Play.

Vivid Sydney only runs until the 10th of June, so make sure to experience the Light, Music and Ideas it has to offer.