If you’re headed to Melbourne for a holiday, or even if you live in the cultural capital of Australia, there are many great exhibitions being held in the city this winter.

The Hollywood Costume exhibition is currently being held at the ACMI (Australian centre for Moving Image) in Federation Square. It was developed at the Victoria & Albert Museum in London, and after having a great run there has been brought to Australia for a limited time.

The exhibition explores the role of costume design and costume designers in cinema.  To do this the curators have got their hands on some of the most iconic costumes in cinema history: Dorothy’s blue and white checked dress is there, as is Marilyn Monroe’s famous white dress. If period costume films are more your style the elaborate costumes from films like Elizabeth and Marie Antoinette are on display, as well as the purple and white striped boarding suit worn by Kate Winslet’s character in Titanic.

Besides the actually costumes, the exhibition also has interviews with designers, directors and actors to illuminate the creative process that takes costumes from script to screen and helps build authentic screen characters.

So if you want to learn more about costume design, or get close to some of the actually garments worn by your screen idols you should definitely go and check it out! The exhibition runs at the ACMI in Melbourne until the 18th August 2013.

If the history of costume design isn’t your thing, then head over to the Museum of Melbourne where an exhibition highlighting the rich historical culture of Afghanistan is on display. 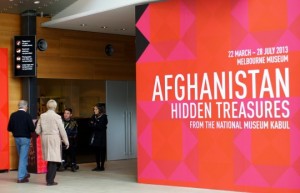 Containing over 230 priceless artefacts, many of which are thousands of years old, the exhibition chronicles the rich history of Afghanistan from the history of the Silk Road travelled by Alexander the Great, Genghis Khan and Marco Polo to the influence of the Greeks and Romans.

What makes this exhibition even more fascinating is that that many of these artefacts were thought lost or destroyed in the many conflicts and instabilities that have rocked the country for the last 20+ years. However in 2003 they were rediscovered in vaults in the central bank of the presidential palace where they had been stashed by employees of the National Museum in Kabul.

The exhibition runs at the Museum of Melbourne until the 28th July 2013.

The Monet’s Garden exhibition is currently being held at the National Gallery of Victoria. Devoted to the impressionist works of Claude Monet that were painted of his garden at Giverny in France, the exhibition contains some of his most famous and recognisable paintings. 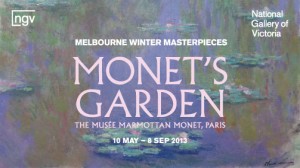 As well as Monet’s works, the exhibition also contains a interactive history of Monet’s life and some of his own personal items.

The exhibition runs at the National Gallery of Victoria until the 8th September 2013.