As the Blues and the Maroons (better known as New South Wales and Queensland) battle it out for the title of 2013 State of Origin Winner, Digital Editions takes a look at the history of rugby league and the State of Origin in Australian history.

The Beginning – The Formation of Rugby League in Australia

The sport of rugby league originated from a split in the rugby union bodies of Britain, Australia and New Zealand between 1895 – 1908. At this time rugby 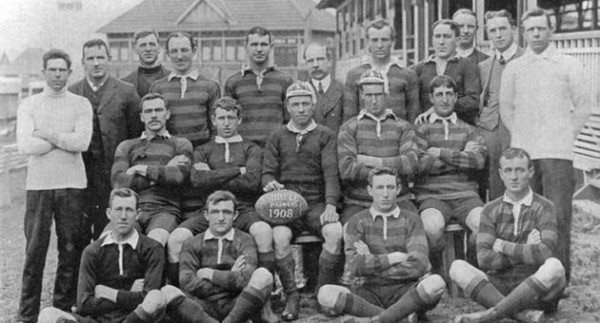 union was played by both working class and middle class people, however all of these players were barred from earning from the game. This was fine for someone from an upper to middle class background, however as the popularity of the sport increased and matches increased, working class men found it increasingly difficult to play as their need to work to earn a wage severely limited their ability to train, and conversely injuries sustained from the sport affected their ability to work and support their families.

As a result the game became divided, and in Britain there was a split between the southern union and the northern union, with the northern union breaking away from established clubs. It was this union that started playing what is now known as rugby league. Australia and New Zealand soon followed suit and the first ‘rugby football league’ (as it was called then) was established on the 8th August 1907 at Bateman’s Hotel in George Street Sydney. Players were soon recruited for this new code in which they would earn money and be compensated for their injuries and loss of work, even though this meant a lifetime ban from playing with rugby union clubs. By 1908 the first season of rugby league competition was played in New South Wales and was met with great enthusiasm. 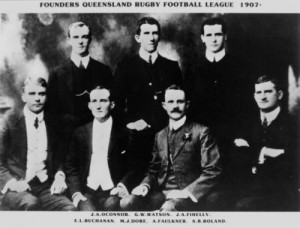 In a rugby league match between New South Wales and New Zealand at the start of 1908 created so much hype that as a result the game had to be played in Queensland, a state which was already a great rival to New South Wales in rugby union competitions. By July that year the ‘Queensland Rugby Football Association’ was created and competitions between clubs began.

Slowly this new code came to displace rugby union as the dominant form of rugby in New South Wales and Queensland.

Although New South Wales and Queensland had played various representative matches between each other since 1908, there was no established competition between the states until the 1980s. This was mainly due to lack to support, as most of these matches were held mid-week so they didn’t interfere with the inter-club matches that occurred on weekends. There was also arguments over whether players who represented the states had to be playing for clubs in those states, or if they had to be from those states.

Finally at the beginning of 1980 the various clubs and bodies had come to an agreement and the first State of Origin Matches were held in Sydney and Brisbane. These matches were met with little enthusiasm and one media outlet dubbed it the “three day wonder”. However by 1982 interest in the competition grew and this year saw the first ‘two matches, plus a decider’ format that the series still uses now.

For the rest of the eighties Queensland went on the dominate the competition, with New South Wales only winning the shield two times.

An Established Competition – The 90s and Beyond… 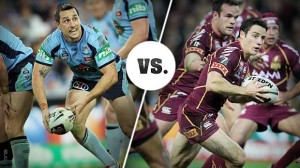 However Super League only lasted for one year (1997) and after this the State of Origin just went from strength to strength, seeing a growing number of fans and mid-week events dedicated to the competition. In total, Queensland has won the most titles, 19 in total, whilst New South Wales have won 12. Overwhelmingly, Queensland has dominated the competition during the 2000s, however could a change be on the horizon? Possibly.

So grab your blue or maroon jerseys and scarfs, write the date for the last game of Origin in your diary (10th July 2013) and get ready to see who will take out the State of Origin title for 2013!