In 1949, Eric Arthur Blair published an explosive novel pointing to a future that, at the time, must have seemed ridiculous, a work of science fiction.

More commonly known by his pen name, George Orwell spoke of a future where Big Brother wielded total power over its subjects to uphold the greater good. The general populace are under constant surveillance of telescreens and the catch phrase of “Big Brother is watching you”.

Quite possibly, many of our younger generation equate this phrase to the more recent TV reality series “Big Brother”, where this fictional novel becomes a reality. Big Brother really does watch every move and records it and exposes these lives to a captivated audience.

Yet the TV series of Big Brother captures the lives of volunteers, members of the public who requested their lives be recorded and published for the world to see. They were willing participants all in the name of entertainment, and more importantly a chase of fame.

Yet what of the rest of us? The majority? Are we so keen for our every move to be watched? Recorded? Scrutinised?

We Know What You’re Doing 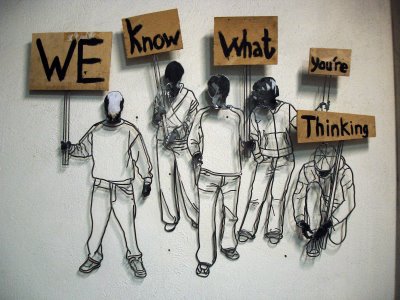 hile George Orwell spoke of great telescreens that pervaded society, the modern equivalent is much less obtrusive. Rather than a giant Big Brothers eyes staring at our every move we instead carry a portable tracking device.

Remember the hysteria in the 1980’s when the futurists spoke of implanted chips, of tattooed numbers engrained on our arms? Now we happily give out our personal number emblazoned on business cards and brochures, on websites and emails citing it as our mobile phone number.

On July 4th, 2013 many gathered in the US to demonstrate against the recent leaks of  an NSA contractor that, among others, Google and Facebook are providing detailed information about the greater populace to improve security.

Known as Fight For The Future, this Not for Profit organisation hopes to use the extraordinary power of the Internet for the positive and expose those that are seeking to use it to achieve the Orwellian society of 1984.

As increasingly our lives are lived online, so too is our information. From accessing our bank accounts to the recipes we seek, the apps we download, the searches and websites we visit … all captured on servers and, if well collated, obviously provides true insights to our preferences, our likes and dislikes.This isn’t just about government access, not even about the potential criminal element that could benefit, it’s about being able to target your exact requirements with advertising, or possibly censoring your search inquiries to a preferred subset of the provider.

This article was inspired by this morning’s read of an article by Sam Varghese, published in IT Wire article: Google Facebook Missing from Anti-Surveillance Protest.