“Keek is a revolutionary new way to discover the world and interact with others. Create & watch fast, short video updates with your smartphone, tablet or computer and share them with friends.”

Move over Twitter, and better get off to the nursing home Facebook, there’s a new social media platform in town. The newest kid on the block hoping to cash in on our generation’s need to constantly be connected to each other is ‘Keek’.

keek is a free social networking site that allows users to create profiles and upload short 36 second video status updates that are pretty much the video equivalent of Twitter’s ‘Tweets’. To keep connected to other ‘Keeks’ you can follow people or subscribe. There’s really not much difference between these two functions as far as this dLooker could tell, except with one you are notified via email and the other in your newsfeed.

The site, as well as the iphone/android app, also has private messaging capabilities, and as with Twitter and Instagram you can also notify particular people about your post by adding an ‘@…’ in the post. In fact many have already dubbed the service as “the Twitter for video” and even a “micro version of YouTube.”

One of the things that probably sets Keek apart from all its other social media counterparts is that it provides its users with a free detailed analytics tool, so you can track how many Keek views, subscribers or followers you have, their location and referring sites with easy to understand graphs and charts. 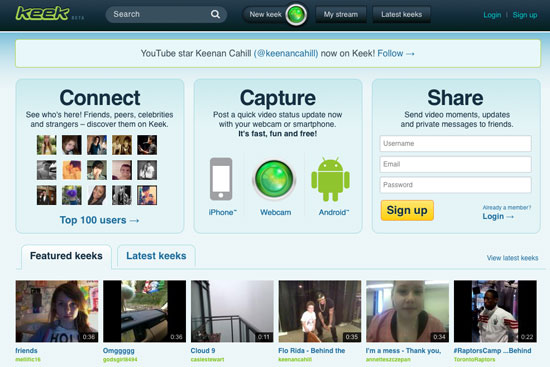 It’s a great idea and one that many celebrities, who have already embraced the features of Twitter, will be sure to jump onto. What’s more, videos that are uploaded onto Keek aren’t just restricted to the Keek website or app, like those on Facebook for example. These videos are able to be shared via Email, SMS, Facebook, Twitter and Tumblr where others, even if they don’t have a Keek account, can view them.