As age creeps up on me I can’t help but consider the achievements and losses sustained through the increasing use of technology.

Like the enormous loss of jobs as technology transitions low skilled workers to automated machines.

On the weekend my son asked what an ATM was … well, it’s an automated teller machine. What’s a teller? Well, it’s where banks used to employ people to give you money before they outsourced it to a machine and charged you $2.00 to withdraw money.

Or this morning as I traveled over the Harbour Bridge and almost without consideration listened to the beep as my electronic tag was charged … again the loss on an unskilled position that once collected the toll is now relegated to a beep.

There is also the exodus of retail jobs as video and music stores close down. Even supermarkets increasingly utilise the self service lane – how long before these positions are a figment of our imagination and I’m answering a question about what’s a “checkout chick”.

I remember a flatmate of mine in the mid 90’s working avidly on an architectural model, a primary school skill set used for dioramas, that transformed paddle pop sticks and cellophane into multi-storey works of art resembling a future building or structure that was to be developed. 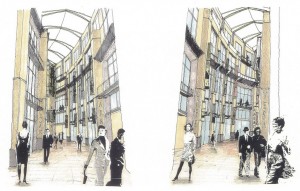 The Sydney Arcade (pictured) started in a flat in Darlinghurst with stick figures and discussions about damn heavy windows and how engineering feats would need to be achieved to hang them safely.

Needless to say most of the discussion was way over the head of this amateur listener.

Even this art form with the introduction of 3D CAD programs and animated walk through’s is now lost – with university educated computer programmers now replacing the creative talent of yesteryear.

What else is to go? How long will malls survive?

As we pummel into Internet world of online shopping and improved customer interface, what’s the future of fashion? Accessories? Main stalwarts of the arcade experience, whose presence supports the cafes, food courts and associated services.

Will shopping for an outfit become exclusively online? Before you say no, consider the difficulty in purchasing a CD for a “record store”.

Where does it leave urban planners? Infrastructure developers?

I know the march forward is inevitable, change is necessary and adapting is key to survival. But some things I like to reminisce about, the good ole days – where armed with paddle pop sticks and cellophane a skyscraper could appear before your very eyes.