Imagine for a moment you could step back in time. Before there was Facebook or blogs, before even cars or electricity. Imagine you could return thousands of years and witness life as it was pre-civilization.

In today’s modern world it’s hard to believe that there are still cultures around the world that are unaware of the Internet, of television, of modern transport. That there are cultures that live without contact with the wider world.

We are so connected now, so interdependent on global supply chains and information transfer that the thought of a self sustaining community happily ensconced in the middle of some South American rainforest is as alien to our lifestyle as encountering a new life from another planet.

Consider the disbelief of UFO’s 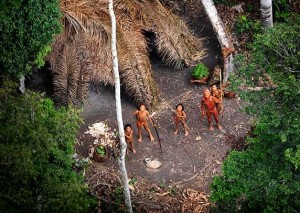 , of alien life forms and counter this with a tribe in Brazil yet to encounter the enormity of the outside world.

Sure they’ve traded with neighbouring tribes, they use metal pots and machete’s – so they are not ignorant to the existence of other man.

Yet their culture is so far removed from ours that it would be devastating for their community should they be overrun by urban development, including logging.

Believe it or not, an uncontacted tribe lives less than 100 km from Machu Picchu, one of the busiest tourist destinations in the world.

Within the Javari Valley indigenous reserve on the border of Brazil and Peru, it  is home to an estimated seven uncontacted Indian groups.

However, these tribes are now in danger. The ongoing global demand for natural resources is rapidly encroaching on territory occupied by these tribes.

Many have not even believed there existence, until recently this footage clearly showed uncontacted tribes standing in awe at a passing flight complete with a BBC film crew.

“Without proof they exist, the outside world won’t support them,” José Carlos Morelos

Of course the irony is that now with social media, YouTube and other forms of information dissemination there is something we, as the larger global community can do about it.

Uncontacted Tribes is dedicated to lobbying government officials and relevant bodies to protect these communities and hope to provide them a safe future – without having to sign the petition themselves!

For more information and see how you can help visit their website, Uncontacted Tribes or their YouTube Channel, Survival International.