In a wonderful display of humour, CIA launched themselves into the social media platforms joining both Twitter and Facebook early June.

The inaugural tweet of any new account has always been a focus, so in true ingenuity CIA used this opportunity to take a good dig at itself.

Almost an X-Files feel to it really … or Men In Black.

I’m not sure who’s been placed in charge of social media at the CIA, but I’m sure it’s an interesting post.

I’m not sure if they are using metrics to assess their ROI on social media presence, but as of mid June Twitter is outstripping Facebook 10 to 1! 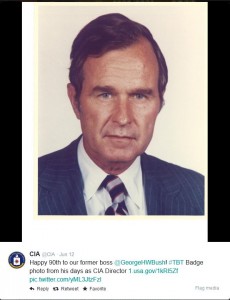 Is there a conspiracy to all this?

They also uploaded same image to Facebook, citing that George W is the only man to have served as head of the CIA and president of the United States.

I’m sure many are aware, that this isn’t the first foray for the CIA online. For years they have published a detailed world fact book.

This is a wonderful resource for all types of information about the countries around the world.

Where Will It All Lead?

I’m fascinated to see where it all leads. Whether the CIA will put up with the trolls on Facebook, the rants and raves … or will the antagonists slowly have their Facebook accounts removed?

Regardless, a big welcome to the CIA on social media circles and we look forward to the insights into the unclassified section of the social media managers.