Google’s algorithm has for long penalised pages with too many ads – specifically too many ads ‘above the fold’ (in the top part of the page that the viewer sees without needing to scroll down). Their rationale is that web surfers don’t want to be scrolling through ads trying to find the content. But the irony is that: Google itself has some very ad-heavy search engine results pages (SERP) and it is moving to increase its ads even further and by quite a lot. Is this a bad thing? Well that depends on your perspective, as we’ll be addressing.

Ads Above The Fold

We did a little test. We queried Google with a highly competitive, high-priced keyword to see how many ads it would squeeze onto its first page. As shown: 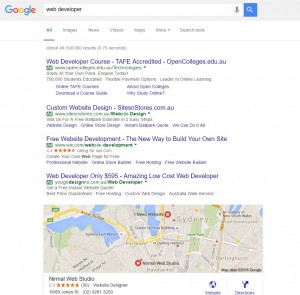 Four detailed paid search ads, with linked subpages and even a rating taking up over half of the above-fold screen on a large 1920×1080 screen resolution. This leaves just enough room for the Google Map and one local search listing above the fold. You have to scroll to see the conventional natural search listings (yes, that day has come). It also has 3 more paid search listings down the bottom. So out of the listings on this page, 7 were ads, 12 were natural (plus 4 natural image thumbnails). That’s not a high ratio of content to ads, so it looks like Google is violating some of its own tenets.

Not all SERPs are this ad-heavy though. For instance, the SERP for ‘Blue Whale’ doesn’t yield any results because it’s not a lucrative keyword for well-known 21st century reasons.

The number of ads on Google’s first page has actually decreased because Google dispensed of its sidebar ads. The SERP sidebar is now replaced by ‘Knowledge Graph cards’ (those providing collated info and direct results) and only the occasional ad. The effect is that there are now more ads in the results section which shifts the list down, often below the fold.

Google Announces it will Increase Ads by A Lot

Google anounced this year that it will be ramping up its ads even further. First there was a limit of max 3 paid search listings at the top of SERPs. Now it seems to be 4. And the max for mobile went from 2 to 3. Now Google is planning to roll-out some much more sizeable increases.

Google Maps is undergoing a large thrust towards monetisation. with location-based ads soon appearing in SERPs and also featuring ‘promoted pins’ for businesses (who pay to appear prominently on Google Maps). Promoted pins may be part of the forementioned feature on SERP, may show on the minimap or may not show, that is yet unclear.

Will Google become All Ads?

We should probably address the rather cynical opinion that ‘Google’s going to be all ads soon’. Our prediction: probably not in the near future nor at all. But ads may encroach further.

What this going-to-the-dogs attitude has correct is that Google is a business. Sometimes it’s easy to forget due to Google’s innovative pricing strategies. But when you get down to it, you realise that Google is not a search engine company in the same way that Dairy Farmers is not a cow company. Google is a marketing company. Because marketing is by far its main source of revenue. So increasing the number of ads on its SERPs from 3 to 4 for instance would dramatically increase their revenue.

A Google search innovation that is enabling more ads per SERP is the Knowledge Graph. Knowledge Graph cards provide information, often without sources labelled that Google has mined from the web and presented in a convenient format. This makes less search results neccesary. The user can then often find more in less space without having to navigate to the ad-less second page.

Is this a Good or Bad Thing?

This depends on your perspective in terms of whether you use or advertise on Google, and in which way.

Most of us use Google. And the obvious effect on us users is negative. More ads. It doesn’t really need more explanation.

If you advertise your business on Google SERPs, there are two ways to go about it. (1) You can use Search Engine Optimisation (SEO) to make your page rank well on Google. Or (2), You can pay Google to include your website in their paid search listings (its pay-per-click but let’s not get technical).

If you’re in category (1), then this change is bad for you. If the first page has fewer results, then it is harder to make your website one of them. Or, if it has the same number of results, they still have to compete for attention with more ads.

If you’re in category (2), it may be a good thing. You get bigger ad listings, the prices may be kept down by the new availability of more listings, and there are new opportunities for location-based advertising arising. Then again, prices for ads on popular SERPs are not cheap. Some ads cost in the order of $50 per click i.e. every time a single user clicks on your ad (buyer or not, accidental or not), you have to pay $50. Hence the reason why more people aren’t switching from category (1) to (2).

Let’s wait and see what Google’s ad changes will be. Doubtless this change won’t be apocalyptic for natural search listings, but let’s just hope that into the future they remember that even though they are a marketing company, everything hinges on their search engine.