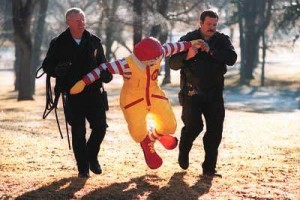 The ethics of marketing are oft criticised almost as much as lawyering. But if it’s so bad then shouldn’t it be made illegal? i.e. would it be better for society if marketing was outlawed altogether?

We decided to explore this question because our idea is that the litmus test of ethics in practise is ‘Should x be made illegal?’. We’re talking about practical, not theoretical ethics which everyone who understands the phrase ‘Don’t be an [expletive of choice]’ has a reasonably similar idea of. Something is ethical if it is ‘the most good, least bad decision within the bounds of practicality’.

And of course, we can’t address this question without imagining a radical scenario where police track down marketers and the way people find out about products is quite different. Read on if you’re interested –

How would Consumers find out about Products?

This question is at the base of this issue, because the functional purpose of marketing is to inform consumers about their product offering. But realistically, marketing does a lot more than ‘informing’ – it persuades, influences, some would go as far as to say ‘manipulates’.

As a preliminary, there must be some other conceivable way of consumer’s accessing information about products for this notion to not be entirely absurd. The most reasonable is probably business directory listings, but not ones that allow the companies freedom to market themselves in their listings like dLook. This would be a highly regulated if not government-owned directory that lists businesses and their products in an entirely functional way. Firstly, there are major benefits to this system –

Benefits include, obviously, a more objective way of evaluating products. Consumers would have no choice but to consider actual nutritional information rather than claims of ‘All Natural’ and ‘Fat Free’. And businesses would be encouraged to spend their capital on improving their produce rather than making it appear better through marketing. And all this could be integrated into an efficient online shopping-type interface that makes it easy to search and compare.

The benefits are actually quite rosy (for everyone except business owners that is). But now for the downsides which hinge on the question –

Would Marketing Criminalisation be Ethical in Itself?

More skeptical types by now may have asked the question: how would the government actually regulate marketing (and even as a consumer, that may affect me). A thought may have conjured of the government’s current attempt to criminalise something pervasive, legal in other countries and now available on the internet but nevertheless with a degree of social harm: The War on Drugs. The resources expended on enforcing these laws: astronomical, and the affect on privacy and personal freedom: worse. In fact, many would agree, and not just from the tie-dyed left-, but also from the tax-loathing, freedom-loving right-wing that with criminalising something of such nature: the cure is worse than the disease.

Then, with the images of this losing battle still in your mind, try to imagine the government attempting to regulate something as abstract as information. Trying to confiscate every admixtured/titrated/ziploc baggied mg is hard enough but imagine the very expensive game of cat and mouse the government would be playing with black market marketers who can use any channel including the internet and all of their digital marketing expertise to target their market (which is of course, quite specifically: not cops). And those businesses shady enough to resort to such black market operations would be rewarded in a sense by being able to market with less competition from other advertisements vying for attention.

Personal freedom would doubtless be impinged on consumers by the government’s regulatory activities. But also importantly, businesses would lose the freedom to promote themselves and possibly to do a lot more. If a shop owner paints her shop pink, is this advertising? If a business owner hires young people to create a reputation for trendiness, is this advertising? What kind of overpowered government department would make such decisions? And what affect would this have on the competitiveness of Australian businesses?

Should Marketing be Illegal? Would it be Ethical Overall?

Now back to our premises: does the good outweigh the bad? (This is probably the time to tell you that our ethical analysis was based on a theory after all (you can’t really avoid this unless your naive or inconsistent). It’s the ethical theory of Utilitarianism which is a very practical one at that.) We conclude that marketing can harm society. Current regulation acts to reduce harmful advertising and this is appropriate. If regulation were increased to the point of criminalisation however, the inextricable problems with this would be much worse than the marketing itself.

This is the basis for our ethical position on marketing. Marketing is not unethical per se. It can be, it shouldn’t be and it doesn’t have to be. dLook’s directory listings are fact-based and not misleading. They’re a public sector, economically-stimulating alternative to the Orwellian one we just described. Also, dLook’s advertising relies in a large part on Inbound Marketing (click to read our articles about it), where marketing is about producing good content, not trashy infomercials and cheap tricks. If inbound marketing catches on enough to make these a thing of the past, then the anti-marketing case will become even more untenable.