Should marketing be considered an artform? Should art be considered a marketingform? This is a debate of classification – of where to draw the line between things… or if. The line seems distinct and clearcut, until you really look at it directly.

What is the functional definition of marketing? The promotion of a message. Most often the intent is financial, but sometimes it is social. Beauty and emotional effect are often used for effect. Truth also, but just as often it is intentionally distorted.

What is the functional definition of art? The creation of artefacts of truth, beauty or emotional effect. The intention is often these attributes themselves above promotional or economic reasons.

So that’s it, we’ve got the definitions so we can just sit back in our solid, very distinctly defined chair feeling very ontologically comfortable. Well, no. Keep reading because there’s a lot of cases where these areas overlap to a sizeable extent.

The best proof of overlap between these areas is crossover cases. These are the basic four types: 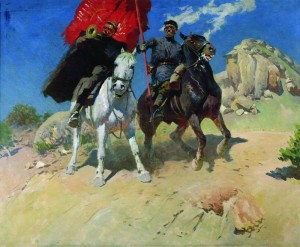 * Marketing that is as beautiful, truthful and emotionally effective as critically acclaimed art e.g. the Apple iPod ‘silhouette’ ads were praised for their Warhol-esque beauty. 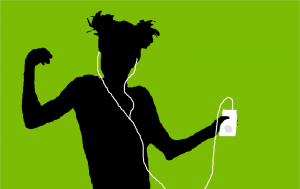 * Marketing that imitates art e.g. (of which there is about 20 examples for pretty much every artistic masterpiece, easily Google-able) 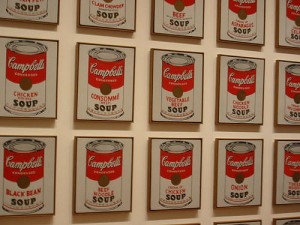 The former two points illustrate that like many things that appear to be clear cut distinctions until you read an essay about them – it’s not really a line, but a spectrum. Socialist realism is more over the art side and iPod ads more over the marketing side. It’s still quite distinct in most cases – distincter than most things in this world, but there are still borderline cases. Take the short film The Other Side which Time magazine headlined that it “Will Make Your Jaw Drop” – an ad for Honda. Not only fantastic cinema, but groundbreaking experimental cinema in which the viewer can press the ‘r’ key to view the other side of the story. If you havn’t seen it already, we urge you to check it out to see a film with two sides – one that is really good art, the other that is really good marketing.

The latter two points are about intentional attempts to blur the line. Marketers and artists are very aware of the line. The Line. And it’s very natural for people, especially creative types to try to break such a thing – because there’s potential in it and because they can.

Marketing that imitates art runs the risk of being kitshe, pretentious or noticeably inferior (to the actual artwork or actual art). But there are some really good examples out there.

Art that imitates marketing is can be very beautiful, truthful, fun and critically acclaimed. Warhol’s artworks are the prime example. But all this is because they are art, not marketing. In fact, Warhol’s have an implicit satirical, anti-marketing message. Campbell’s Soup Cans isn’t an ad for Campbell’s Soup, it’s a social comment on how consumption in a capitalist society is driving the processes of rationalisation and standardisation.

As you have probably figured, the relationship between marketing and art is a one-sided one. And it comes back to the definitions, and the way people want themselves and their work to be labelled.

Marketers would love to be called artists, creating artworks that are paragons of truth and beauty.

Artists would hate to be called marketers – the epitome of the commercialised and devoid.

Also, from observation, with no claim to objectivity whatsoever:

Lots of marketers were Art students, even ex-artists who for practical reasons shifted from aesthetic-epistemological-emotional motivations to more financial ones. In doing so they crossed The Line and became less accepted among the art community as they gained acceptance into the business community – a community in which the ‘starving artist’ is a trope of the ex-artist who still has flouted their radical anti-marketing views despite ironically (or is it post-ironically) now being an artist. A character in many marketing departments whose convictions are generally not taken seriously.

Which parts of this artful trifecta does good marketing contain and in which does it fall short?

Beauty: Marketing can be quite beautiful. Beauty is eye-catching, memorable and best of all financial. Many beautiful effects can be produced, with just Photoshop and an ex-artist’s (or current-artist’s – we’ll see) intuition.

Emotional effect: Of course, this is another attribute that is vital to marketing. When an ad makes you heart-warmed enough to instantly soften towards a brand that you previously regarded as faceless and monolithic, then that’s an effective ad. This P&G ad is the one we were referencing specifically (one of the few ads for P&G the parent company, and pulled off very well).

Truth: Ahh, truth… We were putting it off and you can tell. Portraying truth doesn’t always work in an ads favour like the other two attributes. In fact, a degree of distortion is often always implied. For example, the euphoria depicted in Coca-Cola advertisements isn’t intended to reflect reality. It’s intended to exaggerate one aspect of it – the enjoyment of drinking a Coke. This ad for instance, is not an accurate portrayal of the human condition, it’s a facet of Coca-Cola’s (2009-) marketing ‘Open Happiness’ campaign. 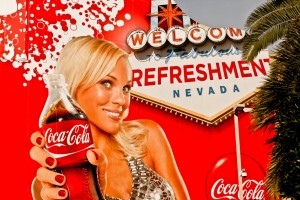 That isn’t even an especially extreme or scurrilous example. It’s merely an exaggeration of one truth to the exclusion of the others. There are more fabricated marketing realities than Coke’s.

Then what about art? Is art truthful or is it at best just an exaggerated view of a narrow perspective on reality? Well, the style of Realism fares the best in this attribute. It aims for objectivity. But what about the other artistic styles? At the equal and opposite end of the spectrum is Absurdist art which makes no truth-claims so is equally truthful. Apart from these extremes, every other kind of art seems to portray something actively or at least not absolve itself from the possibility of interpretation. Doesn’t every portrayal inevitably exaggerate? A finite canvas/novel/etc. can’t represent each part of the world equally.

To be honest, we don’t know where these essays are heading when we start them. We just start off our investigation unbiased and try to maintain it all the way through. So when we got up to this part in writing we got stumped for a second, realising that no answer to the problem existed that we had heard of before. So we decided to figure it out for ourselves. This is our theory which involves adding to the definitions of ‘marketing’ and ‘art’ in order to remove the confusion.

This definition seems to depreciate marketing as being a poor, misguided imitation of art. Why would a marketing company be publishing this? Well, we’re trying to point out the crucial difference between these two forms that is so often misunderstood. And understandably so because it is complicated. To summarise the conclusions of this entire essay you could say:

Marketing is often artful in the same way that art is often promotional.

But in order to be able to talk about them in a non-verbose way, we say that marketing is more so promotional and art is more so artful.

A problem lies in uninformed clickbaitish headlines that proclaim that the new ad for so-and-so is art. we don’t believe, for the sake of being able to talk about art or marketing or anything in any sane way that art should have so broad a definition. The ad is like art. Or is artful. And the greater problem lies in when even less informed marketers read these articles and start to disregard The Line between art and marketing. But dLook respects The Line. We realise that we are doing a job with an external goal whatever it may be. This is our objective. And this mentality shows in good ads that realise that they are not art, made by good marketers who know they aren’t artists so don’t try to insert any self-promotional (internal) artistic frippery into the piece. This is the mentality that we try to cultivate and it pays off with good marketing that does what it is intended to do, and does it well.