If you had an old-school English teacher, you may have been told to avoid using emphasis styles in writing like italic, bold, underline, ALL CAPS and exclamation marks!!! With even greater stress they probably also discouraged indentation, tables, font, point size, images, figures and colour. This is a very classical theory of writing. It is that ‘you should use the writing itself to create emphasis, not the formatting. Formatting is lazy writing.’ It’s a well-reasoned opinion, but has it stood the test of time? Does it apply to all types of content? Is it a rule or just a guide? It’s a point of personal opinion and debate among writers, grammarians, typographers and the like on the web, but hasn’t been covered (to our knowledge) in relation to marketing. It also hasn’t been covered in relation to other writing forms by marketers (us) who can provide some insight from our field of expertise.

Emphasis Styling—Is it ever OK?

Should you steer clear of content even for the most informal forms of writing? No, this is silly. Even T.S. Eliot would have used emphasis styles if he were writing a blog post or designing a poster for a laundromat. The fact is: there are vastly different forms of writing, and this rule was intended for full-length formal fiction and essay writing.

Benefits and Drawbacks of Emphasis Styling

When is it OK?

Emphasis styling should be used where the benefits outweigh the drawbacks. These are some cases from our experience as a guide: 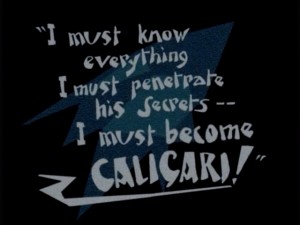 * Blogging and social media—brevity is the key and emphasis is A-OK. People want to get the message then move onto the next site/post. They don’t want a wordy essay that explores the nuances of anything. If you want to #rant, this isn’t the medium. And while commenters will slam spelling errors, it isn’t internet culture to worry about the finer points of grammar or typography.

Where it’s not OK:

Not all Emphasis is Created Equally

Some types of emphasis formatting are better than others. Of course, this doesn’t account for all situations, but it’s about as objective as you can get when it comes to design. Here’s a quick guide to the common formatting options and when they should be used:

THE POINT IS, AND IT CAN ONLY BE EMPHASISED BY USING LESS EMPHASIS: moderation.