Advertising, content, humour and the entire creative world is undergoing a dramatic change. Originality is no longer the key to acclaim. Over 50% of ads are rewrites of other ads, memes have made humour formulaic and all mediums of art are embracing imitation, replication and recontextualisation.

What has caused such a diametric change from our culture’s previous valuing of originality? There was an era when discovery of uncited appropriation could mean shame and ignominy. Does our society still value originality to the same extent even though it is so accepting of imitation? Is remix culture a positive or negative trend for human creativity, what caused this change in the first place and what implications does it have for marketing and content writing?

The Origins of Remix Culture

Despite its reverence throughout history, originality has always drawn some contention among the artistic community. Mozart was known to remark that he never tried to be original. The implication being, he tried to make his work as good as he could without caring for originality, which actually said nothing about the quality of the work.

Remix culture took roots in the 1950s however. This was an era when consumerism began making replication a standard element in people’s lives: product packaging, reruns, mass production and fashion trends. Pop art’s complex take on this is that it both satirised and glorified this consumer culture.

Pop art’s commentary on society is similar to that of this article—so much of what we consume is a reformulation of something else. This can be boring, surprising, unoriginal or even innovative. But whether it is right is a complex issue steeped in layers of irony.

This example of pop art is one of the innumerable incarnations of Andy Warhol’s Marilyn Diptych and of the Che Guevara poster. 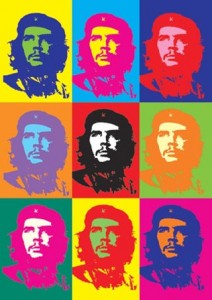 Warhol and others of this pop art movement worked by hand—laboriously replicating details precisely so as to not ruin the effect. The original pop art movement didn’t have access to computers, but now in our digital era, remixing is easier than ever.

Techno remixes, memes, video game mods and the ultimate distillation—copypasta are all prime examples of our current remix culture. The ease of copy-and-paste exact replication, plus gargantuan storage capacities and internet connectivity has enabled a culture where even if true originality is valued, is it worth the trouble?

Here is some emoji copypasta. Copy and paste to your heart’s content:

The thing about good remixes is that they use appropriation and reference in ways that are exciting and surprising. It seems paradoxical, it is certainly complex, but a remix is innovative, novel and certainly creative if it sheds a new light on a previous work. For instance, Graffiti artist Banksy’s famous Pulp Fiction artwork is far from boring despite 99% of it being an exact replica of a frame from the film Pulp Fiction. It is famous because of the one thing he changed in the frame—that the gangsters are holding bananas instead of guns, providing his own perspective on the scene—of the inanity of stylised violence. 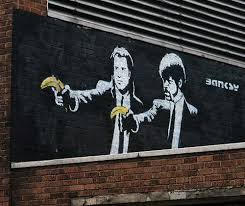 So what this suggests is that originality is still highly valued—for it is not the imitation in a remix that is valued, but the original element.

Is Remix Culture a Positive or Negative Trend?

Remix culture can be largely positive. Without it we wouldn’t have some of the great artistic works of Banksy and Warhol. More broadly, we wouldn’t have the same level of artistic dialogue, conversation and critique, for Remix Culture encourages artworks to comment on each others, not just leave this to critics.

However, Remix Culture also produces a lot of content that is simply not needed. Does the world need another Shrek movie or more Minion memes or more parodies of the Mona Lisa? No, but despite the waste of time and resources, this stuff is still a small price to pay for the kind of cultural flourishing that is happening as a result of the boundless inspiration that comes from borrowing and remixing other works.

What does Remix Culture mean for Marketing and Content Writing?

Remixes are becoming increasingly accepted in society. They aren’t scoffed or held as low brow (the brow system is becoming very outdated). This means that you should feel free to derive inspiration, even heavy inspiration from other works in your marketing and content writing. But make sure you add your own spin to it. There’s nothing more stale than a direct copy of something everyone’s already seen. And of course, there is still condemnation of those who try to pass other’s works off as their own.
We always get enthused by new trends because each one creates fresh ground for new creative work. And the thought of the kind of work that can come out of each new trend—even if it comes with the normal amount of waste byproduct is truly exciting.