The internet has taken a new, weird turn that you might be aware of only obliquely. Photoshop collages, Japanese influence, 80’s–90’s nostalgia, Greek statues, ironic capitalism, post-everything, ｆｕｌｌ ｗｉｄｔｈ ｃｈａｒａｃｔｅｒｓ, endless remix and recontextualisation, gifs, jarring contrasts, screenshots, political incorrectness and all-out maximalism. This is a new kind of weird that you may not have even seen before. There are several branches of internet culture that each have relevance for design, music, art and for centering yourself within the youth/online culture of today. 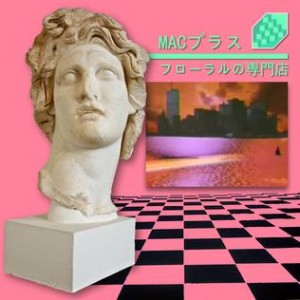 Vaporwave is at the heart of much of the web’s cyberculture. It emerged around 2010–11 and has since had various branches that we will also explore. That image above is the quintessential example of Vaporwave—the album cover for Macintosh Plus’s album Floral Shoppe. The following elements of Vaporwave can be clearly observed:

Vaporwave music is similar thematically, but the medium has its own distinctly Vaporwave characteristics and Macintosh Plus’s famous song from Floral Shoppe: リサフランク420 / 現代のコンピュー is likewise a perfect example.

It’s ironic that the conservative corporate-blue coloured social media site used by too many people including your parents to be cool could become the center of one of the most influential new aesthetics emerging on the internet—Weird Facebook. Have you ever seen those meme pages whose primary intent is to weird you out in a way that makes you interested for an infallible reason or somewhat uncomfortable? That’s weird Facebook.

So like, why did the title, along with the profile and banner pics get me to like this page? As best as I can put into words: it has absurdist comedy value that I appreciated, created by the stark juxtapositions between things that are unrelated. There is also irony in the title (actually, post-irony) concerning the New Age movement—the Utopianism of which cyberculture often critisises. So for an overly-intellectual fun-killing analysis of what makes Weird Facebook weird and funny and dank and get likes, that was it.

An example of a Weird Facebook meme (from the page Memehaolic Anonymous): a photo of children happily playing on a swing while police attend to a dead person just meters away. There is no text. The ‘funny’ thing is that because it’s on a meme page it’s funny. (Link to photo WARNING: some may find disturbing). I am also subscribed to this page.

Vaporwave has spawned many sub-genres. Some notable among these are Pizzawave, Simpsonswave and Seinfeldwave because they epitomise remix culture and because they’re just straight weird.

Pizzawave is Vaporwave (art and music) sampled from pizza advertisements. Simpsonswave is sampled from the Simpsons, Seinfeldwave from Seinfeld and etc. from etc. There is an entire genre of art and music based on these things—on the internet. That’s what we’re saying.

Here is a frame from the Simpsonswave song ＭＭＭＭＭＭＭＭ. The 80s-90s nostalgia, shock value and Vaporwave synths are notable. 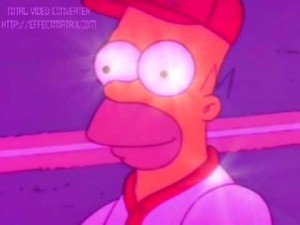 A subculture that was born out of Tumblre in ≈2011. It shares heavily with Vaporwave, but has a focus on the ocean. Dolphins, CGI water, multilayered transparency, blue hair, pastel shades, tie dyed psychedælia, kawaii and hipster wallpaper patterns. This is a seapunk: 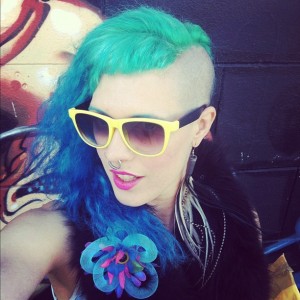 What’s so ‘punk’ about seapunk? Well, in the same way as Vaporwave, there is a deep cynicism of the Utopian, expressed through irony. Seapunk focusses its cynicism of the New Age (also a target of Vaporwave)—especially the environmental movement.

Now for the final and in some ways ultimate form of cyberculture—shitposting. Shitposting is unconstructive content often intended to derail discussions, aggravate people (troll) or just to generally create spam. Shitposting is remix culture taken to the utmost extreme. In the same way that ISIL is an extreme example of abstaining from pork.

Shitposted content is often highly formulaic—largely copy-pasted content. For instance, a shitposter might post a random image with the caption “Is this Death Grips?” (the band. The shitposts on this Facebook page if you’re interested: Death Grips Shitposting). This incites reams of comments of the insightful type: Yes, No, Yes, Yes, No fool. Yes are you an idiot. And etc. And it incites others to post any picture out of like anything on the internet with the same caption, hence clogging up the forum with loads of trash.

Is this Death Grips?

From an aesthetic point-of-view, shitposting is still interesting though. It has a certain kitsch appeal that can be applied to non-shitposted comment humorously or ironically.

What Did I Just Read? Is this a Troll? Is this Shitposting? Is this Death Grips?

The internet has so far spawned numerous aesthetics and subcultures stemming from Vaporwave with a surprisingly vast array of influences and facets, that are all interrelated in an abstract ironic way. Experiencing and understanding cyberculture is not just a rite of living through this era but of creating other content during this era—visual art, music, web articles, inbound marketing, advertisements, etc. Because understanding the current cultural milieu is a necessity when producing content for any audience, even if that content isn’t directly derivative of cyberculture.