“Good design is invisible; bad design is everywhere” is an axiom held dear by many graphic designers, architects, typographers, web designers, UI designers and marketers. In other words, design is good when it does its job without being noticed. It guides the eye to relevant places, provides a pleasant user experience (UX), but doesn’t get in the way or distract. But should design be completely transparent and are there cases when you should design to be noticed?

So that you can understand why this aphorism came about, here is an example of good ‘invisible’ design versus one of bad ‘everywhere’ design. See if you can guess which is which: 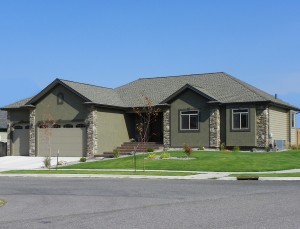 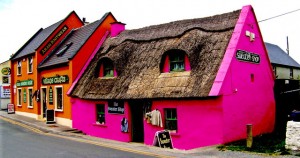 The first house is painted in mellow tones. It may strike the visitor as being ‘nice’ but doesn’t catch the eye of the casual passerby minding their own business and distract them from what they were thinking of.

But the second house is a different story. It is painted in the gaudiest of colours, hot pink fuschia, basically the notorious #FF00FF. The colour may not be bad in itself, but it is an extremely bright colour, so should be used only for highlights. Possibly not at all on a house which is generally too big to have small details viewed at close to highlight. Houses should be painted in mellow tones. Moreover, the poor colour choice conflicts jarringly with the traditional thatched roof, creating an uncomfortable colour clash and a sense of to some extent debasing a nice heritage building.

The Theory Behind Invisible Design: Modernism, Minimalism and Conservatism

Invisible design is aligned with three theoretical concepts that should be kept in mind when applying it: Modernism, Minimalism and Conservatism.

Transparent design is a tenet of Modernism—a philosophical movement of the 19th–20th century that valued rationalism, science, progress and efficiency. Invisible design is above all things efficient (as we will explain), and has an appearance of sterility that is a stark departure from the naturalism of the Classical period/movement prior to modernism. It is also in high contrast to the Postmodern philosophical movement, in which rationalism and order are flouted for effect.

Minimalism is also a key concept in invisible design. It is the style encompassed by the adage “less is more”. The belief is that clutter is unattractive, let alone less functional. Therefore, beauty lies in being functional and without stylistic flourishes. The opposite is maximalism—in which large amounts of detail are used for effect.

Conservatism is the stance that favours tradition and stability. It opposes change. It is inescapably political, and yet it plays a part in design. Invisible design is based on the belief that things should be predictable, standardised and not expressive if it means getting in the way. Hence the inextricable link between invisible design and corporations. And visible, progressive design often marks more progressive organisations or ideals.

But is Invisible Design Always Good?

Invisible design can be quite nice, as with the house in the example. It can have the following benefits: