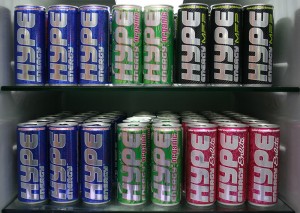 You probably know what ‘hype’ feels like. It’s an exciting quality that surrounds certain things that gets people talking about them and looking forward to them. This kind of hype can be a successful outcome of good marketing. But then there’s the other kind of hype that you probably know. It’s all flash, no substance. A desperate plea for attention and a letdown.

How can hype have such polarised effects? What really is it when you break it down? And how can you use hype to benefit you in marketing?

What Actually Is Hype?

So in short, hype is the feeling of excitement surround something that makes people want to buy it or participate in it. What’s more, it’s when word about that product or event is communicated to reach a large part of the public, often without having to spend money specifically marketing to each one.

Hype is where people are not just exposed to a marketing message once, but many times in multiple forms.

What Are Some Examples Of Hype?

A good example of hype in a lot of cases is movie premieres. For instance, do you remember the lead-up to the premiere of Despicable Me? There were trailers, McDonald’s toys, posters, TV coverage and Minions everywhere . . . . . . 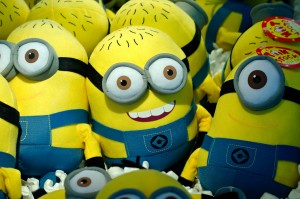 There are still minions everywhere.

Hype certainly can be over-the-top. If hype marketing is not pulled off correctly, or it gets out of control, the result can be that it annoys people, or that it over-inflates expectations.

When you think about hype as being a marketing message that reaches people multiple times in multiple forms, you can see how this has the potential to annoy people.

The best example would have to be Minions (from Despicable Me). Those yellow things that you started seeing everywhere and that still are everywhere even though they annoy the hell out of you.

So if the marketing team for Despicable Me (1, 2 and 3) took a less Minion-focussed approach, then maybe less people would hate Minions. Then again, that is from my adult perspective. Im sure most kids (the target market) still love Minions. 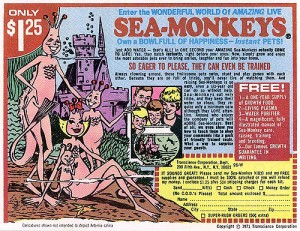 There is a flip-side to hype. It doesn’t always surround your product/brand/etc. in an aura that makes it seem so much better and more magical. In fact, sometimes it decreases people’s appreciation for it.

Hype can over-inflate expectations. It can ‘overhype’ your brand/event/persona/etc. leading to disappointment.

The canonical example of an overhyped product is Sea Monkeys. The advertising of Sea Monkeys makes a promise that makes kid’s eyes bulge out of their head. They suggest that the kid will become the ruler of a civilisation of little biotic humanoid creatures with cities and families and all that. What they actually get is just this: 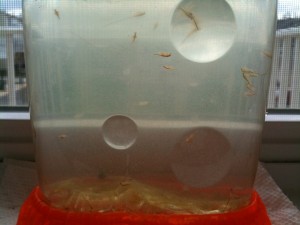 And hence Sea Monkeys has virtually become a Television Trope for dashed expectations. There has been a Simpsons and South Park episode dedicated to it, amongst countless more.

So how do you generate positive hype for your product. brand, event or persona. How do you create hype that doesn’t disappoint, but that actually adds to the appreciation of your product? There are several ways and a few caveats to take note of in order to do this.

Repeat the same message to the same people multiple times. This will build familiarity and cut through the clutter in the adspace.

It’s basic psychology that: the more times people hear something, the more likely they are to remember it.

Consumers build trust in your offering when they see other consumers using and recommending it. This is the power of customer testimonials. Even though you as the marketer have the option to cherry pick these testimonials, they add a valuable sense of credibility to your message that makes hype seem more credible than just hype.

Celebrities turn everything that they touch into hype. They are a key source of marketing buzz. You can have celebrity testimonials, publicity stunts, celebrity-sponsored campaigns and etc. to draw some of the buzz from a celebrity towards your offering.

Scarcity is a classic way to create an urgent need to own your offering. If people think that your product is in short supply, they will want to get it before it runs out.

This works well with products. For instance, McDonald’s at least used to do this a lot with its Happy Meal toys. It always ended its Happy Meal ads with ‘while stocks last’, ‘get in quick’ or something similar.

A multi-channel marketing approach can create the immersive effect of that ‘this thing is everywhere’, ‘this thing is big’. For instance, with many premiere movies, you are exposed to their advertising on TV, on billboards, on the radio, on the internet and etc. It gives you the impression that if there is so much hype surrounding this thing, then it must be something important and you should probably check it out.

So now, as a small business owner, entrepreneur, marketer, brand manager or the likes, you don’t just know hype when you see it, you know how to utilise it. You know how to pull it off effectively and how to not annoy people with it or over-inflate their expectations.