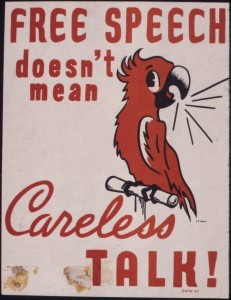 The debate kicked up by Trump and the Alt-Right may have prompted you to choose a side: do you prefer political correctness or freedom of speech in our society?. Either, you can have a society that doesn’t vilify certain of its members and doesn’t scruple from offending and infuriating. One where the tone of Trump, even that of 4chan’s /pol/ (‘Politically Incorrect’) is accepted throughout politics and academia. Or one where expression is stifled and censored (as it is now (?)) by strict rules on what is and isn’t acceptable. Rules that are codified socially, institutionally and even legally.

These opposites are sometimes presented in such extremes. And even if not, you may have already chosen a side. But we believe that these two values are not mutually exclusive. There is some amount of trade-off involved but there is more to the issue than the choice of Trump versus Queen Victoria as the new voice of America/ the world.

The conservative argument is that it is rude and reckless with its speech. MTV is the classic example of this moral degradation. It is progressive and rebellious, and in the present day, largely without a cause. What is the value in Jersey Shore Uncensored’s free speech? In any political or intellectual way there is about none.

On the flip side, the progressive argument is that America and the world are becoming too restrained by political correctness. There are numerous ridiculous examples of political correctness that find their way into cringe compilations and listicles around the net. Here’s some of the fuel for this fire:

This issue is not one of left versus right. It is one of progressive versus conservative. Hence there are proponents on both sides from the right and left.

Where Does The Us And The World Currently Stand On The Issue? Is It Rude And Boisterous Or Prudish And Constrained?

There in fact seems to be both happening in the world and in the US especially right now. There was a trend for a long time towards political correctness. And in a lot of ways this did diminish our freedom of speech. The restrictions that we have placed on our language go down to pronouns in academic writing and to drawing any distinction between races, genders, people or any distinction really. These restrictions hold strong in academic writing, political discourse and even ordinary conversations. And they are so engrained from the early ages of a political correct education system that we may not even notice them.

The problem with covering up speech in such a way is that it does little to address the actual issue underlying. In fact, it may make it worse by hampering rational discussions about these issues. I personally would not be the first person who makes a rule to abstain from political conversations at university over a few contentious issues (race, feminism and disability) because of the backlash that I have witnessed against those voicing anything but left-wing PC opinions. Asserting “that’s racist”, “sexist much” is about the quickest way to end a conversation with me because I just give up on that person entirely. I’m not either, and I’ve wasted too much of my time with those people. The sad thing is that there are many people like me who hold opinions with legitimate reasoning behind them that don’t voice them because they are afraid of being denigrated in such a way.

But the reaction to this suppression is not much better. It is the other extreme. Saying whatever you feel like when you feel like it with no regard for other people’s feelings. That is freedom of speech without a cause. It is a form of linguistic anarchy.

Freedom of speech is a concept that has become so loaded and skewed that it has become confused to us. Hence the Alt-Right’s revolt against the PC is just as mislead as the university professors who mark gender-specific pronouns as errors. There seems to have been so much fuss over and overemphasis of political correctness in the lives of Alt-Rightists up until their revolt that they lost sight of its true purpose. It is a value as timeless as human civilisation itself. It is a guard against speech that is not just incorrect in an ordinary way, but politically incorrect. Because this kind of speech can be highly offensive and also have very real negative consequences.

Hence political correctness should be upheld, but in its true form. Speech that isn’t mind-numbingly relativist in every way shouldn’t be condemned as racist, sexist etc. But speech that voices arguments that have throughout history been proven without a doubt to be absurd and disastrous should be quashed. The world doesn’t need to hear these ideas repeated over and over again by the worst political minds of each generation. (E.g. the straight racists of this young generation operating under the guise of ‘free speech’ and the Alternative Right.) If this is seen as acceptable or a price to pay for freedom of speech, then this is a forfeit without fight to the cynicism that history repeats itself. However, if new ideas on topics that generally haven’t been ‘good’ are brought to the table, they should be considered. No field of thought should be quashed because it is ‘bad’ in some absolutist moral way. Thought can only be ‘right’ or ‘wrong’ and quashing a whole field is plain anti-intellectual and delays progress.

Hopefully, for the freedom of speech versus political correctness debate, progress will be made towards a less extreme position. In between Trump and college feminists there lies a middle-ground where political correctness is valued in tone but free speech is used in the content that is said. For instance, an individually minded college student might venture an opinion that women have already achieved equality in the West. The content of the opinion is provocative yet the tone of delivery is respectful to women and feminists. This is my personal dream for free speech in the future of US, Australia and the world. It has the best of both of the progressive and conservative sides of this current debate.