Feminists—you need to change your tone from one of shrill emotion to collectedness otherwise your views won’t reach the people who you want it to reach most. 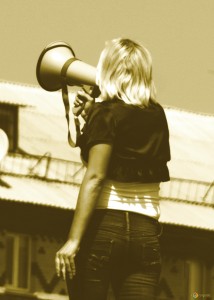 The people who are most averse to feminism are those who will most see a hysterical whining feminist rather than a reasoning individual with a point to make.

See, this article isn’t so misogynistic. It isn’t as bad as you expected right?

Well, maybe it does seem illogical and infuriating but take note: this article is well aware of the logical fallacies in tone policing. It’s aware of this great comic on the subject and is largely a response to it.

This article is not from a logical-rhetorical perspective, but from a marketing one. Logically, your argument is the same irrespective of tone—that’s irrefutable. Rhetorically, tone policing is often used as a silencing tactic of those oppressed, that’s historical fact. But the person you are talking to probably won’t be an agent of pure logic. They will be a person and tone thoroughly influences the way they perceive your argument

I am a privileged white male who is sympathetic with feminism, yet still has that knee-jerk irritation and urge to snigger and make an unsavoury joke when I hear emotional feminist rhetoric.

If you’re angry, I urge you to read on because I believe this article will make you calm down.

As a marketing major content writer I know how to get a point across and anger is the most frustrating method.

The problem is—and this goes for all displays of greater-than-normal emotionality—that people have a mental shortcut that polarises rationality vs emotion. It’s one of those mental binaries that people are so prone to making at a very early age—even at the genetic level and that are then extremely deeply rooted forever.

But it is based on observed fact. When people get emotional it turns them towards pre-programmed patterns of behaviour that don’t answer to conscious reasoning. Like the urge to raise your voice and pace, even to refute arguments without considering them and to block all empathy with the subject of your anger. These are primal irresistible urges. And just as deeply rooted are the instincts to react to anger. The instinct is to respond to anger with anger. To respond to a lack of empathy with a lack of empathy, etc.

This is the effect of feminist rage: producing equal and opposite fury.

It’s this tribal instinct—from both sides of the issue that turns the debate into a war. It’s failed politics and failed PR/marketing of the entire feminist movement that has made great strides in a short amount of time but now needs to stop being so radical (in the West as opposed to the Rest) and start using a more conservative approach.

And not only does anger beget anger in the rhetorical opponent, but in yourself. It has the potential to create this vicious cycle of anger and frustrated self-expression if it becomes your primary mode of communication.

Imagine Being A Pissed-Off Chauvinist For One Second

For a second, try to be as calm and empathetic as possible and imagine a man who isn’t a feminist because he holds the remarkably common view that men are more logical. Then a women appears on the news leading a feminist rally—shouting and even sobbing to rile up her female crowd. You can imagine what the man would see. He would see female emotion closing down a street and disrupting the men at work. He would see a woman overreacting to her own obviously still fairly privileged, First World situation even though she may in fact be talking about women’s rights in the non-First World in which case this is certainly abject enough to cry about. The man would become if anything more adverse to feminism even though he is the exact kind of person who needs to be persuaded.

If you exert time energy speaking out about feminism, you want to make an impact, and I recommend using this approach instead of anger. This approach doesn’t take the emotional side of femininity away from you—not just because this is wrong per se but because it uses it to actually increase your impact. But collectedness is still a key part of this technique because establishing credibility is a must.

1. Start off being collected, calm and unemotional

2. Build emotion as you build your argument

While collectedness is the foundation of a good debater it is not the substance of a great one. Great orators use emotion to get to the heart of their audience. And this is where the feminist’s penchant for emotion should be channelled.

If you watch video clips of the great orators of history—Martin Luther Kind Jr., Obama, etc.—you will notice that anger is not a large part of their speech unless warranted (warranted from the audience’s perspective, not theirs). Instead, feelings of inspiration, hope, enlightenment, progress and unity are fostered. These feelings open people’s mind to new ideas, rather than closing it like anger does. Anger makes one defensive of their existing beliefs—like in war—whereas equanimity makes one open to new ideas and change.

This technique is useful in various situations and with regards to many topics. And a happy side effect of using it is that it likewise makes you more open to other’s opinions. This can create the positive cycle that I think a lot of feminists need which is to become more flexible with their beliefs—to be open to ideas that may seem chauvinist at first but which are actually sensible and moderate—and to make peace with the enemy, because this is the way that real change occurs on the rhetorical battlefield—not war.