Fans of great books always rally and cry that their favourite novels should be adapted by Hollywood. It is true, that there is an enormous backlog of films more than worthy of blockbuster films (and an enormous excess of films that weren’t so deserving like Jack and Jill, Sex and the City 2, most of the Transformers franchise, and the list goes on).

But then there is a third category which is an even more curious case. This is the list of fantastic books that could never be converted into film because they would lose too much in the process. Generally, a large part of what makes these books great is their writing style and depth—both things that convert poorly into the film medium.

Why Some Books Just Can’t Be Converted Into Films

There are key differences between the textual and film mediums that come to light when considering film adaptions. In a nutshell, films are best for depicting action, raw emotion and well-constructed characters. Books are best for depicting the thoughts of characters, complex and vast information, long stories and long conversations. So short, action-packed stories with shoot-now-talk-later characters translate well into films but long, subtle, complicated tales of ruminative characters don’t.

Another key difference is control over attention. Literature has a near absolute control over your attention. It can direct you to look at a tiny object and it can even get you to think about something that you wouldn’t have otherwise thought by just getting you to read it. Alternatively, film has a looser control over your attention. It must zoom right into a tiny object to get you to focus on it, so this is reserved for highly important objects. Otherwise, this object would just be a background prop that the viewer is likely to miss. And films have an even harder time directing your thought—which is only seldom done through the use of a voice-over because it can become tedious. Instead, film viewers think more subjective thoughts.

So now that you understand the theory behind this, let’s jump into the list–

Infinite Jest is the 1000+ page cult classic that is the exemplar of a book-that-can-never-be-converted-into-a-film. Any cinematic take on this book would not do it justice because it couldn’t capture:

There have been attempts at adapting this book into video but with limited success. An adaptation was written and proposed to HBO but never produced and we can guess it was because of these insurmountable obstacles. But there is an episode of Parks and Recreation that plays out like a small-scale adaptation of the book. It’s pretty good but a sitcom episode can’t come close to adapting what may be the greatest novel of the 20th century.

Gravity’s Rainbow is another voluminous novel that is too stylistic and dense to ever be converted to film. Its 760 pages follow the character Slothrop through his trip during WWII in which a carnivalesque array of militarism, sex, drugs, science and other themes are encountered and all these complex, paranoic connections are drawn between them. A film could only suggest and not draw these connections in the way the meticulous prose of Pynchon’s does. For instance, in just the two-word title, Wikipedia lists five references that it makes—ranging from philosophy to literature to science and psychology. Pynchon’s prose would almost all be lost in a film adaptation which would be a large waste because it is so finely tuned and elegant, with each syllable and stress accounted for. 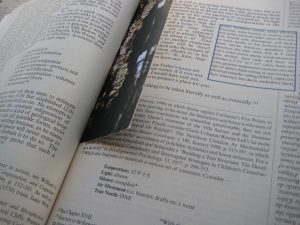 House Of Leaves is a book renown for its formatting. The pages are segmented into tabular patterns that defy the ability to read them in a linear fashion and create a sense of claustrophobia for many. This formatting would be interesting if translated into film but it would be very difficult to accomplish it without irritating the viewer who would be expected to look at all of the sections at once. And the story itself is elusive and the kind of thing that is meant to be a mystery to all readers—and this will include any prospective film producer who will be forced to adapt their adaptation of the story, which will miss the point of the author’s intention of creating a special kind of subjectivity.

The Catcher in the Rye is another postmodern masterpiece on this list (in which all items have been ‘experimental lit’ so far) which due to its subjective, philosophical and highly stylised nature is incapable of translating into a Hollywood film. If you have read this book you can imagine what it would turn out like—just a teenager wandering around New York. That’s it. That’s the whole story, but it’s not dull, it’s a great book because the ruminations of the protagonist and his characterisation as a sullen, dejected youth raise keen insights into the era of postmodern America. If this were adapted into a film it would be one of those indie films which is too slow and too much effort to watch because it’s all downbeat monologue and endless walking around and lots of drawn-out existential shots of trees and stuff and time for the viewer to realise that they may as well just read the novel.

This masterpiece of science fiction, fantasy, historical fiction and detective fiction by all appearances should have translated into a roaring film, but as we all know it sucked and the reason was—the Achilles heal of film adaptations—that it couldn’t capture the complexity of the book. The 544pg book encases 6 xstorylines across 6 worlds and innumerable well-constructed characters. The film just leaves you disappointed because it doesn’t do any of the 6 storylines justice. It doesn’t give you enough time to get engrossed in any of them before the climax starts to mount.