We live in an enlightened era where it is not acceptable to mock those of different races, genders, social classes and those with disabilities. Yet it is rare to catch a few hours of 6 o’clock PG-rated TV that doesn’t include gags that mock the less intelligent. Just about no one cares about and everyone laughs at what is now the largest underclass in Western society. An internet search for ‘unintelligent disadvantage’ yields just one article that empathises with the less intelligent. I disagree with this article’s call for economic and political change, but I do believe that greater social understanding is needed, which is why this article is a sort of manifesto for the Less Intelligent Movement.

Films like Gattaca (1997) shake us to the core with its dystopian vision where the main character is discriminated against due to his inferior DNA. He laments: “I belong to a new underclass, no longer determined by social status or the colour of your skin. We now have discrimination down to a science.” Yet what is more poignant is that this film is close to what happens today. From the moment a baby is born, its IQ is fixed and cannot change. If it has a high IQ, it will have a far higher chance of graduating university and getting a high paying job and getting married. If it has a low IQ, it will statistically have a far higher chance of poverty, obesity, mental illness and a lower life expectancy. Academic achievement have become increasingly, in the modern era, the number one attribute sought after by both employers and partners in marriage.

We can’t change the will of the bell curve in determining IQ without the kind of human genetic engineering in Gattaca which I don’t see happening anyway. But what we can change is our society’s attitude towards the less intelligent. What we need is empathy. Right now, if you are privileged to be an ≥average intelligence person reading this article, imagine being less intelligent. Since a child you can remember thinking you were less worthy than the other children in the class. You knew you wouldn’t amount to much. Now you work hard all day and have still got financial problems. And on top of this, you get a bad feeling when talking to people smarter than you. You can feel their condescension even if they try to hide it and you simply aren’t respected. You didn’t do anything to deserve this.

The second last underclass in modern society were women—comprising 50% of the population, who rose up during the feminist revolutions of the 1960s onwards. In vast numbers, with vast influence on society, they were a force to be reckoned with. The force that unified and drove this revolution was counterculture—alternative academia, literature and other art-forms with strong feminist messages. The powerful poetry of Maya Angelou resonate to this day—“I know why the caged bird sings”.

The less intelligent also comprise 50% of society. Or slightly less if you consider that the middle of the bell curve are grouped into the ‘average’ category. So lets say that the markedly less intelligent underclass comprise 40% of our society—that’s two billion nine hundred sixty million people worldwide who have IQs ≤96. The numbers of people in this underclass are phenomenal, and yet the 60s have passed, the 80s have passed, the internet has developed and still there are no less intelligent groups, no powerful writing and no movement. They don’t have a voice.

The Less Intelligent Have No Voice

There is no revolutionary movement of the less intelligent, no writings and no groups for three reasons:

The obvious point is that by definition they are less able to articulate and mount a movement which is a fact that has to be stated in lieu of it becoming the elephant in the room. They are also less likely to realise the injustice in society’s derision of their group. They are more likely to accept it and even to become a participant in this culture by themselves mocking the less intelligent—like sitcom characters and the depictions of caught criminals on the mainstream news both of which are actually targeted to the less intelligent demographics.

Obviously, there is no large barrier to this group of people creating a movement. Because what we perceive as intelligence is just a broad average of many facets, there are a lot of people who come across as less intelligent and yet can write well, create art, speak well, motivate people, etc. But, the most crucial thing is for this group to realise that they are being treated unfairly.

Less intelligent people have not bound together and created low-IQ groups or anything of the sort, unlike the highly intelligent who have created numerous groups like Mensa (IQ≥140). One reason is social embarrassment. For the very reason that society looks down on them, they are deterred from labelling themselves as being less intelligent and hence this system of deriding the unintelligent continues. This kind of system that discourages the underclass from bonding together because they are embarrassed of being in this class is a common feature of class systems throughout history and to this day.

This third and final point is the linchpin of the other points because it is at the source of the problem and at the nexus of power in our society. It is with the more intelligent that I expect change to begin (if does happen). If intelligent people like the writer of this one article start to reduce the social embarrassment of the less intelligent and make them realise their unfair treatment, then they can mount a movement.

What I want to see is social change. I want to see comedy that ridicules the less intelligent to be given a higher age-rating, so that this kind of vilifying behaviour and its associated beliefs are not learned in childhood. And I want to see writing, art and groups of people that champion a new Less Intelligent movement that holds no shame in identifying under this banner.

What will probably happen, if anything happens is that society and the government will all of a sudden come around to the Less Intelligent movement, but in a misguided, overly eager way that involves a lot of economic intervention and PC language.

Economic intervention is so often a dramatic, immediate way for a left-wing government to show that they support a social movement and are happy to take it out of the pockets of ‘large corporations’, yet it blights the entire economy. So while I’ve lauded this one article the whole time, I disagree almost† completely with its conclusions. It calls for government intervention in the economy to subsidise the hiring of less intelligent workers and to penalise the use of academic performance and demonstrated intelligence/skill in the hiring process. This is the road to the equal and opposite dystopia to Gattaca—of Idiocracy (2006) in which the population and its entire government and economy have been reduced to very low levels of intelligence by dysgenics. I actually support the trend of increasing importance placed on intelligence in occupational and married life because (1) this is the natural trend of the market (for both employees and spouses) and so best reflects the most efficient outcomes and (2) because it will in the long-run be a lot better for the intelligence of our gene pool. Government intervention in the economy creates inefficiency in the most basic economic situations; the best criticism of Affirmative Action is that it subsidises hiring not the best person for the job, but the best person only from a minority group. And Affirmative Action based on IQ would face this same problem but many degrees more acutely.

†It supports early-education (≤3yo) intensive programs for the less intelligent not just those with learning difficulties. But if the benefits of early intensive learning are so significant (which they are), then shouldn’t all children be included in this program? Equality is desirable, but obviously secondary to the quote unquote benefits of better school grades, higher achievement-test scores, higher income, crime avoidance, and better health.

And the social equivalent of this kind of heavy-handed band-aid solution is when the education system and social activists start adding more words to the blacklist of politically correct English. ‘PC-ese’ is the language of academic institutions, prime-time TV, radio, business and the government, so it is basically what we regard as the formal English language. It of utmost importance that we prevent this language from becoming stilted by political and social agendas which is why the convenient terms “stupid”, “idiot”, etc. shouldn’t be barred as they probably will be if this movement happens. Instead, their meaning should be allowed to change over time to a more general pejorative one instead of gaining a taboo status and increasing in meaning which is what happens when you try to eliminate words. It becomes harder to speak about the less intelligence in a well-meaning way and more potent to deride them. There is a lot more to say about PC-ese but it must be said that can’t be called the Stupid Movement because it would never get off the ground.

This movement will be about support, empathy and changing minds. I encourage you to use whatever channels you have at your disposal to get the message out and get people talking about it—conversation, articles, academic papers, visual art, music—there is a whole new field to be explored that could have the same depth and richness as feminist, queer and postcolonial studies. 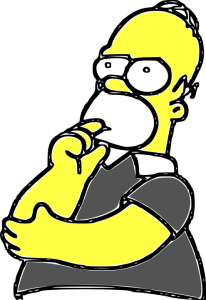