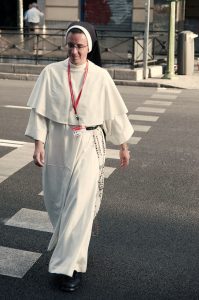 Let’s take brief pause from our frenetic modern lives and think about nuns . . . and monks

They live in monasteries high in the hilltops, far away from our everyday lives. If you live in a Western country, seeing one on the street is actually quite rare. They are not something that we often think about and even less do we really understand—what they actually do.

What do they do with all their time?

And more importantly, what do they do for society?

(Just note that the author of this article is not a Christian; he’s just curious about monasteries because they are so completely different to our modern lives)

Life In A monastery

St Mary’s monastery has a webpage outlining the daily life of a present-day monk in this institution. It involves:

So that explains it. It’s kind of what I expected but it solves the question I’ve always had which is how can people living such a secluded, solitary, ascetic life manage to fill their time. But after reading this webpage I understand how structure and routine can fill the time without idleness and how prayerfulness can mitigate boredom. Yet I am actually more amazed at how people of any era, especially the modern can forfeit their entire life and the entire outside world to dedicate themselves to this.

What Do monasteries Do For Society?

So learning about life in a monastery was nice but now for the real crux of this essay: what do monasteries do for society? What did they originally do in ancient times and even more perplexing: what do they do today?

If I were a cynic; if maybe two years ago I were writing this article I would say that monasteries are not a mountain-top level of holiness that only an elite few ascend to. I would say that they are in the modern day, a convenient place to keep all these people who have been overtaken by neurotic levels of spiritual devotion. Because only an insane person could dedicate their life in such a way to the Lord. So in other words: a monastery is a madhouse.

It is true that in modern society, monasteries are removed both geographically and from connection with the media so that the deeply religious rarely get in touch with the everyday people. Even visitors to monasteries rarely get deep conversations with the monks and nuns because their prayerfulness requires silent solitude. But would a connection with society be a bad thing? I doubt it because the devout religiousness of monks and nuns is so in contrast to the religious extremist (that is unfortunately so in touch with our media today). If people were more exposed to the equinamious side of deep spirituality (of all faiths), then probably this would have a loosening effect on religious tensions.

Furthermore, most people aren’t aware of the charity that monks and nuns dedicate their lives to, because humbleness is a tenet of good faith. A Times article laments the waning numbers of nuns and monks because of the charity-work that they do for society. Sister Joan of Halifax runs a safe house for human trafficking victims; Sister Nora Nash, a Franciscan Sister dedicates her life to upholding corporate responsibility; and Sister Jeannine Gramick has lead a monastic fight for Gay Rights. Many of these humble heros have, instead of honor, actually been denounced by the Vatican which now employs investigators to pay visitations to the nuns in order to keep them in line. The present-day reality is that even though monasteries are still disconnected from society and the media, many of their nuns and monks are far more progressive than the Vatican (and monestaries were historically the progressive centers of society as you will soon learn).

The Vatican bears responsibility for the management and conservation of the Christian faith and so has a very different purview to that of the singular nun/monk. Hence the two must not be conflated. Many modern-day nuns and monks are drawn to the chance to dedicate their lives to improving the world. And social activism is prevalent among the Millenial generation, but one of the reasons for declining amounts of nuns/monks is that social activism can now be conducted without alliance with a monastery—with Kickstarter, a social media account or an awareness-raising media event.

The charity of monasteries was even more important for society in the Middle Ages. Doctrine required each monastery to have a school, and this actually centered the monastery more within the heart of society. Monasteries also kept libraries and copied texts, hence making them the centers of knowledge in this era also. Doubtless, the education provided by the Church, was one of the greatest stepping stones towards modern civilisation, and there is a lot more to say about this, in fact another whole article.

The other vital function of Middle Age monasteries was medicine. Monks and nuns had access to the medical texts and the time to learn to treat the sick, and it takes no scholar to see the biblical connotations in medicine. Doing God’s work.

The final way that monasteries situated themselves at the centers of public life in the Middle Ages was that they farmed crops to brew beer and wine. This if anything would have been the key to their popularity. And in doing so, they developed the large-scale agricultural techniques that were soon to revolutionise civilisation.

And the less objective function of monasteries in olden times, and still in the present for some is that they appease God for the rest of humanity. They generate holiness that makes up for a lot of the unfortunate sin in society.

Should We Feel Sad To See Nuns And Monks Reducing In Numbers?

Personally, I am sad for society to see this happening, because there is almost no devotion to charity that comes close to that of nuns and monks. And a lot of the good charity work that they do will have to be taken up by individuals. This has already resulted in an influx of new ideas into social activism, and of increased progressivism. But without the overal remarkably sound moral bounds of the Church, there is an increased risk of bad ideas being propogated.

Nevertheless, I am glad for the would-be nuns and monks of this generation that they did not go into monasteries for their own sake. Life in monasteries sounds difficult and lacking in enjoyment, so I’m glad that nowerdays, all the key functions of monasteries are performed by other facets of society that don’t require that level of devotion.