Charlie Sheen has “only one speed […]: Go”. He’s amped up on a drug “called Charlie Sheen” all the time and he’s “tired of pretending I’m not a total bitchin’ rock star from Mars.” Charlie Sheen never hides his narcissism like the large percentage of the population who are ‘closet narcissists’. He constantly makes references to himself as a tiger and to other people as ‘fools’ and ‘trolls’. He has a cult following of countless fans me included who find his antics extremely entertaining.

Charlie Sheen has been diagnosed by several psychologists as having bipolar disorder and cocaine addiction—and the manic phase of both causing of his profoundly egomaniacal behaviour in front of the camera. Why do we find Charlie entertaining if not charismatic? And what does this mean for the world if the people who draw crowds and who rule crowds are so often narcissists? Isn’t this trait repulsive and destructive? 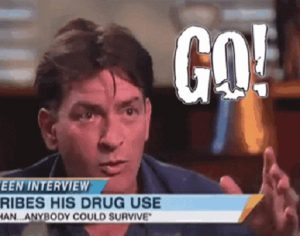 Narcissism is widely regarded as a negative trait by society. This society has been through a lot through the ages and it has learned quite determinedly that narcissism is a negative thing that must be controlled. When hypothesising about how things evolved to be a certain way (this is not a proof, as explained in this article), it is often useful and fun to think about The Most Extreme Case Of This In History and how this would have played out. The Worst Narcissist In History would only talk about themselves and would spend all their time hunting down other people to tell them about how great they are. This person is by all standards an implausible character, but the mind-blowing thing about this simple thinking game is that this person probably did exist over the entire 6 million year history of humanity in which 107 billion people have ever lived. Actually in most cases The Most Extreme Case was likely to be catatonic. There was probably a person so narcissistic that they could only think about themselves and could not think about the world so were to the eyes of others—mentally retarded which is probably also the case. Anyway, the Worst (non-catatonic) Narcissist In History would still have a severely undeveloped sense of self-consciousness. They would undertake grand, unachievable schemes like The Miracle Of Flight and then either give up on them and blame external causes because they could not meet their own high standards or they would complete them to an unsatisfactory standard and then believe that they had accomplished it. They would constantly belittle and look down on others even those superior to them. They would try to control everyone using even the most liscentious means towards their unachievable goals such as Creating Life.

That was a caricature of the Worst Narcissist, but by being completely over-the-top it reveals qualities that are common to most everyday narcissists and the reasons why we often dislike them even though it is a complex feeling that we cannot put our fingers on. Aside from the societal, deeply encoded reasons for just disliking them, an element is that they regard themselves so highly and live in a divergent reality where that is actually the case, and yet from your more objective standpoint you can see that they are really not. Many of them are worse than you even though they look down on you and try to lead you. And many of them are actually at a lesser level of maturity because of their impaired or skewed abilities of introspection. Furthermore, what makes the dislike of Narcissists so complicated and inextricable is that there is often an envious component as well. It’s that you can see that they feel good and you want to feel that way as well but you don’t even though you may be better than them, so therefore you think that they don’t deserve their narcissism as much as you do. And this touches on why we often instead find them charismatic.

Why Narcissism Is Often Actually Attractive, Charismatic And Inspires Trust

Narcissists rule huge corporations, they make themselves the leaders of even small groups in studies and one is even the US president. How does this happen and what are the consequences?

In studies, it was found that narcissists were regarded as having the best personalities in first impressions. But then after 7 weeks, the narcissists were regarded as being the most disagreeable (Source). Four elements of attraction were identified in the narcissists during the first few weeks: confident demeanour, smartly dressed, eloquent and facially emotive. All of these it can easily be assumed can stem from self-assuredness and the need for others to validate your own egotism.

But one of the more complex feelings that is harder to reveal from this study is the way that narcissists inspire followings by projecting the image that they are as great as they believe and that their grand schemes will happen if people support them. People support Donald Trump because they are inspired by the drastic changes he proposes to foreign policy, the military, infrastructure, public institutions and a myriad of other grand promises.

But these are productive narcissists we are talking about—that’s what category Donald Trump and Charlie Sheen fall into because they are successful at projecting their own delusions of grandeur onto others and hence skewing the inner worlds of others towards that of their divergent inner world (these are psychological terms that I’m using, not gross exaggerations because remember, I am a Charlie Sheen fan). They channel the positive attributes of their narcissism to doing productive things in their life that elevate their real selves closer to their grandiose mental images of themselves.

But the other class of narcissists are the unproductive narcissists who you can imagine end up being the less manic extroverted, more depressive introverted types. They are unsuccessful at motivating others because they are too inwardly focussed to empathise with others and understand them. They are unsuccessful at their grandiose pursuits because their understanding of their own abilities and what others consider is good is so skewed.

Which of these groups of narcissists is more pernicious? You probably guessed it that it is the productive narcissists. These are the ones that society has constructed strong walls against and yet still pervade it by leading and influencing people. Actually the worst thing that they can do is manipulate people. This same study revealed that the most charismatic narcissists were actually the manipulative types and the extreme examples of this are sociopaths who lack empathy yet are attractive because of their extreme, absolute, unmatched certainty in contrast to non-pathological people who have self-doubt and shame. Hence they often become leaders and then manipulate people to their own ends, instead of caring about the benefit to their followers.

How To Avoid Getting Manipulated By A Narcissist

It’s often very hard to spot a narcissist at first, but research shows that they will start to become disagreeably visible to you after several weeks. Now that you know this, the best thing you can do is to be on the lookout for the four attractive traits of narcissists and if after a few weeks the personality of this person is starting to lose it’s shine, you should consider: do I really want this person as my leader/boyfriend/etc?

[And I do know that this article sounds like ‘us versus the narcissists—the evil timeless scorn of civilisation’ but that is not the case because they are people too. Even sociopaths are people too. It’s just written for non-narcissists. I may write another an article for narcissists about how to deal with this common trait]