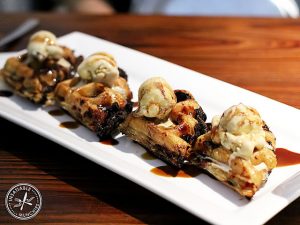 Margherita Waffles with Bacon Ice-Cream, tomato, mozzarella and basil
Is this ironic?

In my last article I made a passing comment that ironic food virtually doesn’t exist. Cooking is an artform, yet it lacks one of the core tenets that is driving our postmodern era: irony.

There is barely a thing such as ‘ironic food’ because this would be disagreeable to the senses. No one would eat an oil-soaked cheeseburger that fell on the ground as a satire of McDonalds. It would be more gross than funny.

But now I’ve reconsidered it and actually, I think irony actually has influenced contemporary cuisine. It has always been present in bad food in an unintentional way, but now, people are making ironic food on purpose. Can any of it actually be good?

The most obvious way that food can be ironic is unintentionally. This is not irony used to make some snide po-mo jeer. It is far from the intention of the cook.

Here are some funny examples from the net/random thoughts:

This is the category that you can’t find at ‘any good local supermarket’. It is a rarity created for YouTube videos mainly then chucked in the trash.

These hipsters made ‘real’ food with Play-Doh. . . . and ate it! They made Play-Doh spaghetti bolognas and a Play-Doh hotdog with the little Play-Doh knife and roller you get in the pack.

The most ironic thing I think is not just that this is food that in a doughy way resembles food, and is actually labelled ‘Do Not Eat’ on the packet, but that all kids actually do eat Play-Doh, and all viewers will remember the taste in their mouths as they watch this video. The best comment is like: “it tastes salty”. This channel is actually one of the vanguards of ironic cuisine. They have made other videos like ‘Will it cereal?’ and ‘Testing the Shower Orange Craze’ that will leave a bad taste in your mouth. In a funny way.

Most ironic foods are not found in restaurants, not even in service stations. They are to be found in shocking never-again YouTube videos. The best counterexample I can think of is Gobstoppers—the childish ‘treat’ that hurts your mouth and is an exercise in tedium. But kids aren’t complex enough to eat it ironically, only childish adults do that. It is more of a test of manhood.

There are some other great ironic food videos. This guy made a 200lb+ giant gummy Burger King Meal. It’s huge (!!!!!!), made with bag fulls of pig fat (gelatin) and tastes disgusting. He chops it with a samurai sword. This guy makes heaps of great ‘food challenge’ videos that if you want to get academic, say something about American society also. E.g. ‘FIZZIEST DRINK IN THE WORLD CHALLENGE (EXTREMELY DANGEROUS)’

But this part of the article will blow your mind the most. Ironic food that is actually good food. Doesn’t that make it not ironic? These are foods that are ironic because they actually are delicious. And we love this, because it creates some surprising foods.

There are some food combinations that seem awful and strange, but that always surprise with the first bite. Peanut butter, marshmallow fluff and pickle sandwich is one of my favourites—because the sweet pastey flavours are cut through with the tang of pickle. French fries dipped in chocolate sauce is the classic salty-sweet combo that parents do not want you to know. Watermelon and feta cheese is a Greek secret that not many people know about. Olives and white chocolate is a complex delight. Strawberries and balsamic vinegar will invigorate you, and may become your next salad recipe. And chocolate + chilli + bacon goes without saying.

‘Deconstructed’ foods were mentioned in the last article, but the irony inherent in this was left unmentioned. In fact, the postmodern concept of deconstruction is almost unimaginable without irony. This Tokyo pop-up restaurant used McDonald’s as its ingredients to create fine cuisine (that is nevertheless, quite funny). It serves Big Macs with added vegetables along with silver cutlery. It is the sit-down restaurant of celebrity chef Masayo Waki. The entree is quite avant-garde—a gelee of McDonald’s vegetables (lol) suspended in gelatin and served with a French fry Vichyssoise (soup). The irony needs not be pointed out: this food is actually good.

Then there are the everyday examples of food irony when one food tries to imitate another. We have biscuits in the shape of an ice-cream, ice-creams that taste like biscuits and etc. The irony is that we can’t just have biscuits that taste like biscuits and that’s it. In our advanced era we need foods that taste like other foods. It is doubtful that they taste as good as the original foods, but they are listed in the ‘good’ category because people want them. And the reason is that they add variety to our life. ‘Wow, I wonder what a hotdog’s take on nachos will be like’ ‘Hmm, that was what I expected. Not great’. But I’m still drawn to try every permutation of food-imitating-another-food. There are countless and I think that this is one of the key ways that the postmodern era is alleviating our boredom which as a reasonably intelligent species was always one of our main problems.