If you are not in the clique of ‘Weird Facebook’ users who don’t think it’s weird to befriend strangers (there are a lot of double negatives that happen w/r/t weirdness in this society), then you will have never heard of Tim Townsend, Bill Hitchert or Tiny Buzz. If you look them up now you will find the pages of an elderly man, business guru and his inbound marketing content. This will cause you extreme mental disturbance. What is actually happening?

This is the explanatory section for those who have never heard of this before. Not many people have; it is a very niche, very weird thing.

Tim Townsend is seemingly a ~50yo guy who posts unusual and more than anything just *irrelevant* content. The quantity and lack of quality of the content just defies belief. There are innumerable photos of him drinking from a coffee cup. And these memes that he makes w/r/t coffee and other minor trivialities. There are also running themes of Christianity, coal mining and some say even rehabilitiation. He has 1216 friends at the time of writing. So if you go onto it, you will be like: why is this actually a thing? What is going on here? And one of the central questions is: if this is a nutty old man, then how is he so in-touch with the Weird Facebook community? It seems unlikely that this guy would be so in tune with the ａｅｓｔｈｅｔｉｃ and the postironic sentiment of cutting-edge memes. This contradiction really is at the core of the absurdity of Tim Townsend—is he losing his marbles, is he unbelievably in-touch and self-aware, is he a Millenial troll-artist?

Bill Hitchert is the charismatic entrepreneurial founder of ‘BHideas’—a ‘company’ that involves sharing ideas. What it actually does is quite ineffable. It’s a ‘personal branding’ project according to Hitchert, but ｗｈａｔ ｉｓ ｈｅ ｂｒａｎｄｉｎｇ? It’s the most postmodern company I have ever seen. Which is hilarious satire (if it is). He is the most postpostmodern person to this date.

Bill’s persona resembles that Mark Vayernachuck corporate-bro-self-promotional-inspirational crap that motivates people who are desperate and gullible. But once again, the thing that really fucks me up is how adeptly he taps into the postinternet culture. His meme-like images and status updates are drenched in ａｅｓｔｈｅｔｉｃ web absurdity. Many people call this art. As a business guru, he is the most in-touch, with it, intensely self-aware self-promoter I have ever seen. For marketing majors like myself this is a game changer. It is so far ahead of its time and so far from the cringe attempts of most corporations to use memes in marketing. It’s like: is this a parody of marketing or is it real marketing in itself? His charisma is not ironic, it is real. He is extremely friendly, he is always willing to spend time replying to you and like Tim Townsend he spends inordinate amounts of time maintaining his online community. If you befriend him, he will accept. (Do it now quickly before he gets to 5000 friends). If you poke him, he will poke you back. My friend and him poked each other 175 times in a row but some people are in the thousands. And he always posts this personalised message on your wall:

Tiny Buzz is what seems to be the inbound marketing page of Bill Hitchert and has 11,000 followers. Its an original content page to promote BHideas and it really gives new meaning to the buzzword original content. Like what the hell is this: 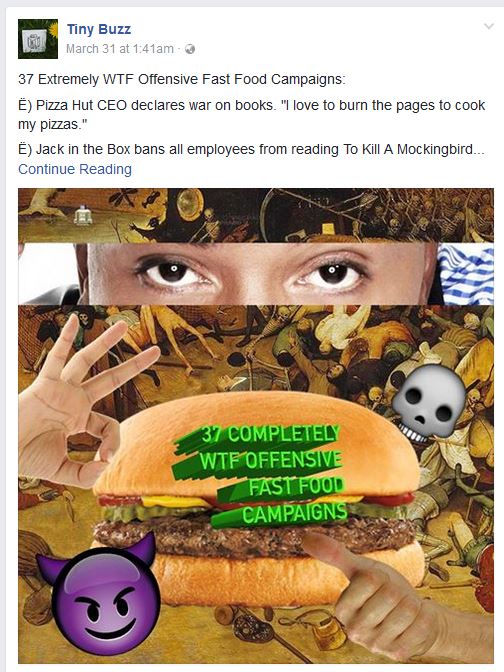 Once again, it’s like a satire of a satire of corporate culture, capitalist America. Hitchert is an ‘entrepreneur’ that this generation can look up to because he’s so past the effete ironicism of the slacker generation. Many people actually follow this not out of curiosity or for laughs, but out of real devotion. I wonder what they think of the batshit insanity of Tiny Buzz. As an alt-lit writer, I like this page so much. There is so much in this—so many fragmented psychotic ideas. It breaks new ground in absurdist art (when taken as absurdist art) because to its very core premise no one knows what this actually is. Is it art?

This has been going on since circa 2010 and people have been watching the stories of Bill Hitchert and Tim Townsend unfold for many years on their timelines. But it was only two nights ago tbh that I found their profiles and got mindfucked like I haven’t been for a long time. So naturally, as a reasonably logical person faced with unfathomable absurdity, I had to get to the bottom of this.

I asked some of my friends who have been onto this for many years it turns out. (And I have to anonymously credit them and all the other people I talked to in my investigation for not just providing leads, but even some key phrases that were too spot-on not to use.) The friends I asked are incredibly keyed into online culture, but are of the majority of those who are Friends of Bill Hitchert and Tim Townsend—they are the out-crowd of the in-crowd—all they have is their theories—and none of them “even remotely logical”.

Here is a rundown of the theories:

You can make up your own mind on many of these because tbh, I don’t have that many definitive answers. I do have some insider info though, and I’ve really thought this through. Here’s the part you’ve been waiting for:

Bill Hitchert is more famous than Tim Townsend and some people were pretty onto him. One informant refered me to this image that implies that Bill Hitchert is none other than John J Callanan. Well who’s that? Idk, but if so he would be an egomaniac in theory. I was like:

So really, this is just another insider-outsider theory.

Then I got a real lead. One randomly befriended Weird Facebook guy just told me (like, without me even asking, just coincidentally yesterday in a strange turn of events) that he knows the real Bill Hitchert. Obviously because he is Bill Hitchert’s friend he was highly respectful to his anonymity. It goes without saying that if Bill was revealed that it would ruin and probably end the whole phenomenon so if I actually knew, I wouldn’t be telling anyone either or writing this article. But this is what he said:

I actually believe this person for some reason. I don’t know them, but it’s because of their resoluteness and that they told me this without me even asking. So at the least this does away with the John J Callanan theory.

Ok, well it always baffled me that one person could have made so much content.

(Insert: another source tells me that Bill recruited people from his BHideas mindshare group ‘IIRC’ to help write Tiny Buzz)

That explains a lot. I’m actually surprised that someone would let me write that in article but maybe it’s time for people to know: this is art, and Bill Hitchert is a genius. Probably the most misunderstood genius of all time but nevertheless, he is far far ahead of anything I have ever seen before. The way I understand Bill is like online performance art (and it is the least implausible theory considering that there are far more fervent forms of performance art than this that involve actual self-inflicted harm).

This is acting—highly realistic and yet fascinatingly absurd acting through social media posts. It makes trolling into an artform. And Tiny Buzz was always regarded as avant-garde art/humour by its 11,000 followers so there is no real surprise w/r/t Bill Hitchert except that he is not a businessman (as the only other article on the internet about this from 2012 kind of just assumes), actually he may be as a day-job, but this is not business, it is art.

Who Is Tim Townsend?

Tim Townsend is more of a mystery and I couldn’t get any real leads on him. My Bill Hitchert confidant wouldn’t even talk about Tim. Like didn’t achowledge anything I said about him which makes it seem that this part of the mystery is even closer to the full truth. So all that leaves me with is my theory, which I’ve kind of been running on this whole time anyway. I think that Tim and Bill are two different artists but obviously working together and collaborating. Tiny Buzz might have both their input and maybe even a third person. They decided to fuck people up as an art project and use images of someone they know for Tim Townsend. It started off as a joke, then became true art, then became their main or only project and they are growing their community of followers to then use for something in the future that they might not have decided upon yet. Some opportunities in the art and business world may be open already but they are still amassing followers e.g. merchandising, a reveal-all book deal.

Edit: I know the secrets now. hahaha not telling