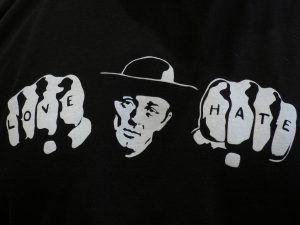 If you want to be the kind of person who elicits strong feelings from others—not necessarily good feelings, gets attention, creates allure and gets people talking about you and trying to work you out when you aren’t listening—then this article is for you. This is about playing tricks on people’s emotions. If you want to have a complicated personality that confuses, disconcerts and excites people and doesn’t necessarily make others feel good then this article is for you. Whether this will make you a more loved or hated is questionable, and whether this is a nice way to be with other people is doubtful. Whether this will make you a good person is unlikely.

Just to be clear, these are ways to make people love-hate you. This is not a list of ways to make people just hate you—which is a far less complex feeling and far easier to elicit. To make people hate you, just start saying stupid jokes over them when they are talking and get really loud if they don’t stop. Or be really germophobic and constantly act disgusted when others do things when eating but then have no regard for your own hygiene and constantly do gross things at the table and never clean up. This could be another massive list in itself but really, all this is just instinct….

One of the most important elements in the love-hate relationship is envy. It is something that we have all felt and the object of countless stories the feeling of contempt for those who have more. It’s a hypocritical feeling, because you hate the person who you want to be. The most common examples are love-hatred of the rich, famous, successful, intelligent. Basically, most people hate their idols.

The challenge with this is actually convincing people that you are better than them. It’s easy if you are actually better than people but if you aren’t, you have to do some jedi mind tricks. Exert supreme confidence with what you are saying. Hype it up to seem grand, putting it in the perspective of history, culture, religion or another bandwagon. Hopefully you can convince people that they should envy your money/art/coolness/personality even if it isn’t that great.

You could also ‘humble brag’, which is when you constantly brag about yourself in a way like you are trying to make out it’s a bad thing. Like you’re getting too skinny and it’s hard to eat enough to put on weight with your busy important schedule.

Or you could straight-out lie. For instance, many people make up little white lies about themselves to make themselves seem more interesting to strangers and even to their friends. You can do the same thing but think bigger.

Following on from the last point, confidence makes people hate you in itself almost. People envy confidence because it isn’t all that human. It is something that you see in movies and in famous people. It is larger than life. Very few people think of themselves as confident people—because we all have self-reflective thoughts constantly that question ourselves. Confident people seem like they don’t have that. They are engaged with the situation, they are in control, they are clear-headed, they are relaxed and they feel good. It is something truly to envy.

Some people seem confident all the time. They hold beliefs and do things that we see the faults in yet they don’t question them. They are self-assured; and this is a thing that we detest because we know it feels good but that they don’t deserve it. What they are doing/thinking should be questioned because it is not right.

People want freedom, but they also want to be taken care of. This is a really basic psychological complex stemming from childhood: the independence-dependence conflict. People will verbally protest you controlling them and giving them orders—in a relationship, in the workplace, in a friendship, etc. But in some cases this will be a front—so they can assert their claim to independence but unconsciously succumb to your authority.

This kind of thing comes to play a lot in relationships and politics especially. For instance, many women feel an attraction to men who are dominating, even though these women may be very liberal in their views. It doesn’t make them hipocrites, it just reveals a discrepancy between thinking and feeling. By controlling people, you may make them think they hate you but deep down they may love you and constantly be drawn to you.

The first rule of being cool is: act like you don’t care. People start to think—that guy has better things to do than to talk to me, that guy has been in way worse situations than this, that guy knows what he’s doing without even trying, etc. It’s a typical tactic for getting people to think that you’re better and for seeming self-assured. So for these aforementioned reasons, acting indifferent can make people kind of hate you, but also do everything to get what little there is of your attention to go around.

Being perfect would work too (see point 1), but being flawed can actually make people see their own flaws reflected back at themselves, and this is one of the most uncomfortable feelings, because people conveniently can’t see themselves unless they are in front of a mirror. To make people love-hate you for your flaws, you have to be flawed in a way that people can relate to. For instance, many people that hate kids dislike them because they see aspects of what they were like when they were that age and they realise that those aspects may still be in themselves to this day. Many of the best empathetic flaws are really juvenile and they have this same effect. For instance, whining about everything. Sometimes this is considered so relatable that people love it even thought they are annoyed.