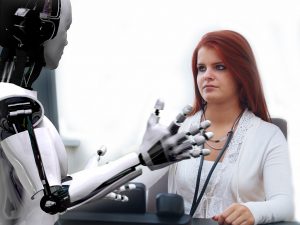 There is a lot of anxiety regarding the looming AI, robotics, automation revolution. This will be one of the greatest industrial revolutions of all time, so….as history has proven, there will be anarchy in the streets. More jobs than every before will be replaced by technology, so what will happen to the economy when unemployment rises to 30%? What will happen to politics when unemployment reaches 50%? This all sounds very dire except I’m actually optomistic that overall, the AI revolution really will be a revolution for humanity, and it will save us a lot of work.

Why This Industrial Revolution Will Be Different

The Industrial Revolution of the 18th–19th century was met with flaming torches by many of the workers of that time. There were concerns that advances in machinery and mass-production processes that are now the backbone of our modern standard of living were going to take their jobs. What actually happened, was some jobs were lost, many jobs were changed, but in not long, these advances created more employment by increasing the purchasing power of the population, enabling them to afford more products and services. This pattern has been consistent throughout the industrial revolutions of history, including the computer revolution. For instance, in 1930, John Maynard Keynes—father of modern economics wrote a paper predicting that by 2030 we would have achieved the 20 hour workweek. He reasoned that with advances in technology, all the work that was being done in his time could be done in just 1/4th of that in 100 years. This is true, but what he didn’t factor is that we will instead keep working the same amount and accumulate more wealth instead. This is a sad fact when you consider that most people just accept working five days a week and spending money on things that don’t make them all that happy. For instance, if you Google a fairly reasonable question like ‘How to work less than 5 days a week’, you will read lots of cynical forum+Reddit opinions who seem outraged by the very concept that they have been working and spending for this long when there may have been an alternative worth considering (for a present-day alternative, see /r/Financial Independence. But this industrial revolution will be different; it won’t allow us to continue making new and more specific jobs short of just paying people to creepily just simulate a working environment. Artificial intelligence and robots will repair itself and it will increasingly have the discretion, sociability and even the creativity of human workers.

How Long Until The Robots Take Over?

So you can see the enormity of this revolution that is just about to hit us. How long do we have?

Well, robots will take over some of our jobs sooner than others. This article has the predictions grouped by occupation, and they are approximately:

Should We Really Be Worried About Unemployment?

The AI revolution is almost inevitable, so that leaves us with two options—these are the options that the unemployed and job-insecure blue collar people of the next few decades will have to choose between:

Option (1) will result in the best outcome overall and into the future, because work will not be wasted and society as a whole will become more resourceful and will progress. Option (2) is obviously worse, but it does stand a chance unfortunately. The workers who face unemployment may opt for this one because it will mean that they get paid more, even though they will soon discover the abject mental health impact of knowing that their work is meaningless.

What Will We Do With Our Time When We Are Unemployed?

Many people actually have anxieties concerning not working. Because these people have evidently been working for so much of their life that they can’t even imagine what it would be like to have all that time to themselves. When working people go on holidays they sometimes get a sense of ennui because they are no longer being bombarded by responsibilites and they actually get the chance to think some existential thoughts. This is ok in my opinion, it is actually healthy to think this way whenever we can, and given enough time, we will probably sort things out.

The anxiety that actually really annoys me however is when people say that without work, we would become lazy, bored, depressed, misguided and overindulgent. This is incorrect because the gentlemen and women of the Victorian era didn’t have these problems to such an extent. They just spent their time doing whatever they wanted, often embarking on grand hobby projects to direct their lives and give themselves meaning. It’s also sad to think this because if people hate their jobs so much then it suggests that there is no alternative. In today’s world, there isn’t one, because present-day unemployment is considerably worse than working. However, in the future hopefully AI, politics and social expectations can change this.