Australia’s allegiance with the US as its military guardian and economic partner have a long and unshaken history. This allegiance was solidified the most during the Cold War era when in 1969, the US economy accounted for 38% of nominal world GDP and China (in the throws of the Cultural Revolution) was just 3%. In the 48 years since, the US has fallen to 24.4% in this stat, and China has risen to 15.5%. In fact, China’s growth rate is more than double that of the US, and it is pegged to overtake its position as the world’s largest economy this century. All this is laid out in this article on what happens if China becomes the next superpower. This raises big questions for Australian policymakers that we could be facing us in the form of a very proximal conflict in the next decade. 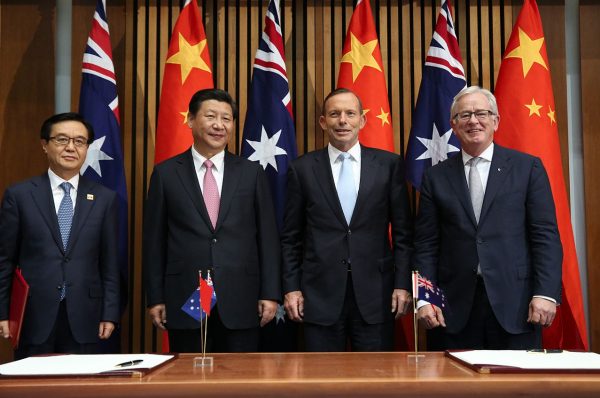 To summarise the previous article: China’s economy is likely to overtake the US in a number of decades, however whether its military will overtake it is a matter of foreign policy and military tactics which require deep analysis and research to predict (in other words, I’m not going to).

But what matters most to Australia is regional dominance. China will eventually challenge the US’s position as military hegemon of the world, and this is enough for it to serve as a protective ally for Australia (because an all-out US invasion of Australia is not really on the cards at the moment). But what will make the most difference to Australia is that it is an Oceanic country that engages in large amounts of trade in the Asian region. It is predicted1 that the US military presence will be pushed out of this region by growing Chinese power, and what this means is that in order for Australia to entirely and safely benefit from the fact that most of the world’s economic growth is coming out of the Asian region, allegiance with China may be the best bet.

There is a lesser but nevertheless significant factor that should also influence Australia’s sense of allegiance: the Trump presidency. Trump’s audacious and oftentimes aggressive political decisions have raised the problem for many US allies as to whether they should stand by this president, or face the uncertain consequences of crossing him. PM Malcolm Turnbull has so far being very supportive of Trump, stating that he would support him in a conflict4. Whether this is a wise commitment is questionable. Trump is calling for an isolationist policy on trade, that will impair Chinese trade and therefore sour the US’s strongest relationship with this country. Furthermore, there are numerous instances of Trump’s rhetoric that have angered and threatened China. In his campaign manifesto, he writes: “There are people who wish I wouldn’t refer to China as our enemy. But that’s exactly what they are”. So far, he has talked about supporting Taiwanese independence and criticised China for increasing military strength in the South China Sea and not doing enough to stabilise North Korea. Some experts predict a US-China war in the South China Sea within the next decade5, and when or hopefully before this happens, Australia will have to decide which side to be on, because in the South China Sea, we will definitely be caught in the middle of it.

Let’s consult Chinese foreign policy to get an indication of what allegiance with China would be like. Our alliance with the US has drawn us into 10 major military conflicts since 1951. Without US allegiance we would not have been involved in most of them (Iraq, Syria and Afghanistan were in our national interests)2. And it’s funny to think about how Chinese foreign policy has been more ethical in the new millennium. They didn’t exacerbate the Arab-Israeli conflict by invading Iraq and they didn’t overthrow any democratically-elected leaders and replace them with dictators. But then again, China is only just approaching the position where it can exercise such power on the world stage, so it is difficult to know what it will do. The concern of course, is that China is an autocracy. Not only does that mean that its government doesn’t fear losing power over questionable policies, also it means that the speed of policy-making is so fast that it can be highly variable and unpredictable. Australia must decide between a historically aggressive (against the Rest, protective of the West) country versus a wildcard. Maybe in the future, we will have more info to work with.

Who Should We Ally With?

For now, the US is the best ally. It is still the world’s only superpower and it is more predictable. But into the future, Australia should start opening up to the idea of allying with China, because it may become a very strategic move.