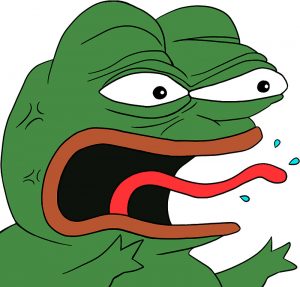 It’s surreal to think of the era that we are in right now. The US has a reality TV billionaire president who has almost every faux pas and vice possible. He is, as we have already belaboured the most entertaining US president of all time. He also has a very low approval rating of just 35% (Source), especially considering that he is still only been president for 200 days. How is this affecting culture? A right-wing, decidedly anti-PC, culturally indifferent and low approval president. As you can expect, culture is thriving.

We’re not going to take a stance and say that Trump is ‘a bad president’, but many people think so. There is a widespread sense of disillusionment and anger that is growing in the US and around the world. Besides the right-wing conservatives who oppose Trump on the grounds of being too progressive, aggressive and downright offensive, the people we are talking about are the left-wing. In times of a disliked Republican president, some of the most impassioned anti-establishment left-wing culture has been produced. In 1969–1974, the presidency of Richard Nixon was the bane to the countercultural movement of that time who fought back with the civil rights movement, the women’s rights movement and also a mass of anti-Nixon art and music from all the big names at the time. Take the song ‘Postcards From Richard Nixon’ by Elton John:

And the Ronald Reagan presidency was just as detested by the left-wing. His conservative economic reforms set fire to a progressive thrust in culture—which as we all know is called punk. Punk rock was deeply political, aggressive, anti-Reagan and anti-establishment. It got the political situation, ripped it up, collaged it back together with the butt pasted over the face and drew profane features all over it with a big texta. Reagan provided the ample stream of political content to be debased in such a way by this thriving culture that was built on postmodern collage, caricature, irony and above all: what it was opposed to. Take a listen to “Fucked Up Ronnie” by DOA, it’s one of many anti-Reagan punk classics:

Now back to Trump. Trump is just as disliked as these Republican presidents if not more. (These guys actually had the agenda of balancing the budget and cleaning up the economy whereas while Trump has been good for the economy, he has created a lot of economic uncertainty.) Many people are predicting a revival of punk rock in the Trump era and I agree to an extent. I think there will be a lot of politically fueled resistant culture coming out of the left-wing. This won’t be specifically punk culture, because that’s a specific trend that happened 30+ years ago. For instance, days after Trump was elected, the American hip-hop collective A Tribe Called Quest released this song with lyrics that clearly oppose Trump’s racial rhetoric:

I think anti-Trump culture will spread across the art genres and music genres, but most of it will be on the internet in the form of memes obviously.

Whereas left-wing culture has something to write songs about, the right-wing also is getting some cultural inspiration from Trump in this era. Trump, as we all know, bolstered the rise of the ‘alt-right’—a social media-driven counterculture of young people who oppose the politically correct values they were taught by our modern society. Trump heralds his support of free speech over politically correct euphamism as one of his most vocal points, and this opens a new realm in culture that can actually make certain statements that were previously not possible. When president Trump was campaigning and did an outrageous impersonation of a disabled reporter, that was actually deeply cultural in the sense that something so absurdly inappropriate was performed by the man who is now the president. It doesn’t mean that it’s a positive form of culture, it just means that it’s very interesting and significant. When alt-rightists post comments on /pol/ that use Nazi symbols, schizophrenic conspiracy theories, Pepe the frog and all manner of graphic imagery and language, that is culture. It is something which whether we like it or not will define this generation and will actually be a stepping stone for culture in the future. Politically it’s not a good thing. It’s a terrible thing, and some would say the same about Trump being in power, but culturally, if future artists use these new developments even satirically, it will create some good stuff. The most current example is right-wing memes. Left-wing Facebook users who havn’t laughed at a ridiculously extreme right-wing meme are lying, and they definitely enjoy memes that satirise the right-wing and their culture.

On a lighter note, at least Trump brought some more discussion to the table with regard to political correctness. In this new millenium some people were taking PC so far in our opinion that it was stifling culture and free expression. PC culture in itself can be a bit bland and vacuous unless you spice it up with a bit of the risque, which I feel that minorities e.g. LGBT and the black community have done very well throughout history.

So What Should We Expect?

Unlike the Reagan and Nixon eras, Trump doesn’t polarise culture, he splits it in two. Expect to see a lot of alt-right culture, but also a lot of left-wing culture and both of these imitating and satirising each other. Trump—America’s most entertaining president in history has come at a time when memes are one of the main cultural mediums, so expect to see a lot, lot, I can’t emphasise this enough, a Lot more memes. Trump is good for memes.