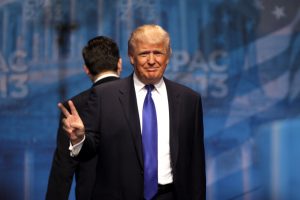 It is almost beyond debate that Donald Trump is the most entertaining US president so far. And most of us—including the large majority that disapprove of Trump get a really peculiar sense of happening and absurdity and cutting-edge culture out of reading about Trump’s latest antics on the news. When before has the US had a president who hosted a TV show, who appeared in a Playboy video and who boasted on tape about forcibly handling women (Source). His whole persona is just so outrageous and extreme that you can’t believe it. I can’t believe that he is the president and that I am living during this time.

It’s so interesting because you have to assume that there’s some intention to what Donald Trump is doing. To an extent, Donald Trump is impulsive and acts without forethought. But it is clear that he has worked this impulsiveness into his greater strategy. There are so many advantages that he gains from acting this way that it is hard to believe that Trump and his PR managers are not entertaining us without purpose.

The Rise of a Celebrity President

The most obvious and probably the most significant effect of Trump’s antics is to garner support in the lead-up to the election. Trump learned something from his career in reality TV: always create controversy. Controversy always gains the spotlight. So Trump dominated the media in the lead-up to the election through one controversy after another. He called Mexicans “rapists” and “criminals”, he threatened to sue Hilary Clinton and of course, he promised to build ‘The Wall’.

But, this strategy only goes far if you believe in the maxim ‘All publicity is good publicity’. I don’t. I think that Trump would have garnered a large mass of opposers by undertaking this strategy. He would have garnered a large mass of people who identify against him, outnumbering the Trump supporters that he would have also created. The reason why this strategy worked was: it overwhelmed media attention for Hilary Clinton. Trump’s PR strategy didn’t depend on his policies being good or uncontroversial. He gained a following because he had the media attention to develop his political personality to a high extent. People trust that which they are familiar with and understand, and this is the crucial counterpoint to Hilary Clinton. Trump, by capitalising the media was also given the ability to portray Clinton’s personality. He always depicted her as two-faced, power-playing and not to be trusted. The best example is the Trump-fueled Clinton email scandal which really became synonymous with Hilary Clinton as a candidate.

When Trump gained power, there was widespread hope that he would calm down and assume responsibility in his position. But it’s clear why this didn’t happen to any great extent. These reality TV tactics are also useful when in the position of President, especially if you are the strongest President politically speaking.

With Trump, there is a deep rabbit-hole that we could go down discussing his personality versus persona, but we have already covered that in another article. Trump probably realises that he is a flawed president, and that in his first 100 days of office he has accomplished very little of what he promised. So, to retain his approval ratings he has been using the technique of distraction—which he is a master of. He constantly creates controversies, each of which get turned into thousands and thousands of units of media content, read by hundreds of millions of people. Each person reading an article about “covfefe” is going to forgo reading an article about Trump’s conflicts of interest. That’s the public’s limited time and attention spans works in the world of PR.

Who can figure out the true meaning of "covfefe" ??? Enjoy!

A Bad President and a Bad Precedent

The most concerning thing about Trump is not what he is actually doing (exp. for foreign policy). So far he has proved himself to be rather ineffectual and we will hope it continues to be the case. But what’s very concerning is the precedent it sets for the future of politics. Donald Trump provides the blueprint of how media controversy can be used to actually gain following. Future politicians will now be less shy of controversy because it could actually be spun to benefit them, and we as the public are more inclined to accept politicians who are quite flawed. Or the alternative is that we learn from our mistakes and build a resistance to this kind of reality TV politics in the future. I am not optimistic but I think that it can happen.