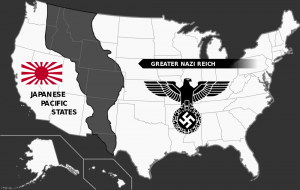 Written by 60’s science-fiction eccentric Philip K Dick and now the basis of a TV series produced by Amazon, this novel is set in an America where the Axis won the war.

The world is divided into two countries: Germany and Japan who compete as superpowers. America is divided into the Japanese-owned Western side and the German-owned Eastern side and also a Neutral Zone in the center. In the German empire: Black people are enslaved once again, the Nazis have developed the hydrogen bomb, have colonised the Moon, Venus and Mars and have drained the Mediterranean sea for farmland. In the Japanese empire: ethnic discrimination is not as severe. Officially, their racial policies are in line with Germany’s, but actually the non-Japanese ethnicities just have lower standards of living and fewer opportunities. In the Neutral Zone: neither superpower has control. The Neutral Zone has its own government which seems non-discriminatory. This zone is very dependent for the two countries for its economy, through trade. The Neutral Zone is clearly a political solution between the two superpowers. Central America is where uranium is mined, so the ownership of this land was obviously a point that was highly tense in this nuclear age.

Compared to Dick’s other novels, this one is uncharacteristically realistic. It is set int he present-day, it is well-researched and plausible as opposed to his other great novels which usually feature aliens, altered states and telepathy all in the one book.

The Man in the High Castle is highly recommended for any Dick fan who would like to see another side to Dick’s writing, and for anyone interested in finding an answer to the burning unspoken question of the 2nd World War: what happens if the Axis win?

The next big alternative history question: what if the Confederate States of America had won the war? The year is 1864 in an impoverished America. The slaves have been freed but the Confederacy has had an aggressive imperialistic foreign policy that has seen it invade and conquer the whole of Latin America and also Pacific Islands including Hawaii. WWI was won by Germany, whihch gained control of large areas of Europe including the Baltic and the Balkans and now stands as the competing superpower to the Confederacy.

In the confederacy: females do not have suffrage, ethnic minorities are disadvantaged and technology developed along a different line. Steam powered vehicles are the primary mode of transport, and horse-riding is still common. The internal combustion engine, incandescent light bulbs and aircraft were not invented. Technology is behind, and economic growth is perpetually stagnant. There is a declining population, general lawlessness and most people work for almost nothing in exchange for basic living necessities.

What if the Black Death plague of 1346–1353 killed 99% of Europe’s population instead of 1/3rd? The many hundreds of years of alternative history covered by this book sees Europe being repopulated with Muslims and the American Indians resisting Muslim and Chinese invaders. There is also a 67 year war fought between the two vast civilisations that emerge: the Chinese and the Muslims.

4. The Difference Engine by William Gibson and Bruce Sterling, 1990

The point of divergence is 1824: Charles Babbage completes his Difference Engine, so the computer is invented a century ahead of time. He then proceeds to develop the more advanced Analytical Engine. He rises to political power as class tension rises. He is assassinated in just a matter of years by Ludditian revolutionaries who want to delay the progress of technological change. Babbage computers are becoming mass-produced and a feature in most homes and businesses. Basically, the novel explores the possibility of an information revolution in the 19th century, including the emergence of programmers (of punched cards) and even hackers (‘clackers’). Technology advances faster than in our timeline, especially in engineering, accounting, government intelligence and national surveillance. Steam-powered technology reaches greater heights, which makes the British Empire even more powerful. The United States is fragmented by Britain to prevent it from becoming a competing superpower.

Compared to William Gibson’s other novels such as Neuromancer which are set in the future, this novel is very historically based which is interesting. While Neuromancer and several of Gibson’s other works used punk culture to create the genre of cyberpunk, this novel was a pioneer of the genre ‘steampunk’. It is rich in imagery of advanced 19th century-style machinery that is characteristically brass, clunking and steam-powered, and this is an aesthetic that would inspire many to come including Howl’s Moving Caslte (2004).

The Iron Dream reads like a pulp, post-apocalyptic sci-fi, but actually it is a metafictional, alternative history masterpiece. The book itself is written by a fictional Adolf Hitler who emigrated to the US in 1919 after WWI and found work in publishing using his artistic skills. It’s a humorous comment on how closely the ideas of sci-fi and fantasy literature can be aligned with the extreme right-wing, racist Nazi ideology.

Without Hitler in Germany, the Nazi Party disbands in 1923 and the Communist Party succeeds in bringing about a communist revolution in 1930. There is no second World War and the Soviet Union takes over the UK in 1948 and is increasing in influence in Latin America. The US and Japan align to prevent the Soviet Union’s political domination over the globe. The Soviet Union conducts a genocide of the Jews which is far more total, because there is no political power of the other nations to prevent it.

As for Hitler’s novel: in the year 1142 A.F. (after the nuclear war), radiation has mutated the human gene pool, making most of humanity have blue skin, bird beaks, etc, including some seemingly un-mutated ‘Dominators’ who possess mind-control and desire to rule the world. The parallels to Hitler’s beliefs regarding the Jewish race are very clear. The heros of the novel are known for their lack of mutations, and set about to euthanise the mutants of the world, and to quash the threat of the Dominators. The novel does play out like a sci-fi reenactment of WWII at times, but even so it is very fascinating and entertaining.