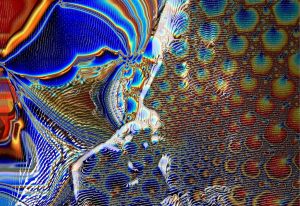 1. Matter Is Energy And Energy Is Matter

To begin, the greatest mind-f@^k of 20th century physics–

Einstein’s formula is now so famous that few people know what it really means besides the nuclear bombing of Japan. It’s called the mass-energy equivalence formula and states that: energy (E) equals mass (m) times the speed of light (c).

E = mc2 is a profound discovery contained within a beautifully precise equation. It’s the perfect example of how a brief equation can hold immense power for both construction (nuclear energy) and destruction (nuclear warfare).

2. Micro-Black Holes Could Exist That Are Smaller Than This Full Stop: . (And Most Of The Universe Is Made Of Them)

It’s not that crazy….to think that tiny black holes could be flying through space at undetectably high speeds that formed at the time of the Big Bang.

Clearly this outcome was deducted from theoretical physics, but why would anyone come to such an outlandish conclusion? It’s to explain what the universe is made of. They know that the universe is only 20% matter, it is 80% dark matter. However, they have been searching for years without success to detect this dark matter. This hypothesis provides the discomforting alternative explanation that 80% of matter in the universe is in fact black holes, however most of them are too small and fast-moving to effect us.

3. The Observer Effect Of Quantum Theory

4. The Universe Is A Hologram Of A Lower-Dimensional Space

Can you imagine being one of the Japanese researchers on this theory and bending your mind to think of the universe in such a divergent way. Holograms are devices that are able to project 3-dimensions from a 2-dimensional film by splitting the direction of light into at least two directions that meet at an exterior focal point. It doesn’t matter if this is overly complicated, just that it proves that the 3D can stored in and projected from the 2D. In 1997 these researchers theorised that our entire universe may be like this. The 3D space that we inhabit, gravity and even time could be projected from this lower, flatter space

Why would the universe be a hologram, as opposed to what we directly see? Researches this year have found evidence suggesting that the holographic universe theory can explain the irregularities in cosmic background radiation. This discovery could be the key to relating Einstein’s theory of gravity to quantum theory, which would be groundbreaking, not to mention revolutionising our entire view of the universe.

5. Gravity Is Made Of Particles

In the same way as the electromagnetic force is known to be composed of photons, gravity may be composed of ‘gravitons’. This relates to Einstein’s mass-energy equivalence proof that requires waves to have a mass (particle) counterpart.

If gravitons do exist, we could make them in our particle accelerators. The ability to manufacture gravity would be absolutely revolutionary and sci-fi, but would require some major leaps before vertical walkways become safe for the general public. Firstly, if it is possible to create gravitons, they would disappear into extra dimensions almost instantly, hence why it is so hard to even observe or prove them.

6. Our ‘Universe’ May Be Contained Within A Giant Black Hole

Our universe may have been created within a giant black hole that exists within another universe. It’s an unsettling theory but it’s based on the mathematics of what occurs when matter falls into a black hole. For obvious reasons, the theory has not been tested practically, but if true, all black holes could contain entire other universes.

7. The Universe Has 11 Dimensions

This outcome of string theory (called M-Theory) posits that the universe has not 4 dimensions (3 space dimensions + time), but 11 dimensions. Since being formulated in the 20th century, no experimental evidence has be found to support 11 dimensions, but the mathematical elegance of this theory, coupled with its vast implications has attracted a large following.

The science-fiction following of M-Theory is the main reason that so many people know about it. Some science-fiction actually makes some fairly valid points as well. The Three-Body Problem by Liu Cixin includes a single proton being unfolded into 11 dimensions (embedded in our 4 dimensions), making it many times larger than the universe (but infinitismally thin). In 11 dimensions, there is enough space-time and complexity for entire universes potentially containing life to exist (within each proton). Keep in mind that this is still untested science-fiction we are talking about however.

Also note, that M-Theory is not the only extra-dimensional theory within String Theory. Bosonic String Theory posits 26 dimensions!

8. Events In The Present Can Affect What Happened In The Past

This raises so many questions, but hopefully this kind of explains it…. The researchers in 2007 set out to explain the mechanism for the Observer Effect in the aforementioned double slit experiment. It turns out that if you observe a particle as having acted as either a wave or a particle, then it will cause it to have acted that way back in time.

Hypothetically this could imply that if we observe light from distant stars as being either waves or particles, then this can change what state they were in millions of years in the past.