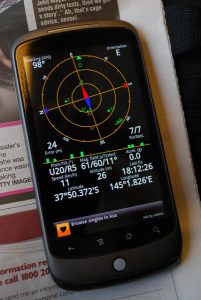 If you value your privacy or would prefer that certain people not have the ability to know your exact location, then you will be disconcerted by this study from the University of Washington published in the last few days….

The method of the study involves trying to track one of the research group members around Seattle using online ads, with a budget of $1000. As much as this sounds like an augmented reality game, it played out as a info-security-conscious individual’s worst nightmare.

The researchers were able to track the test subject’s location within a distance of under 8 meters, with just a 6 minute delay. Over the 7-day test period, they were also able to ascertain the subject’s home and work addresses.

The researchers hypothesised that even deeper and more personal information can be retrieved via this method by targeting specific apps on people’s phone. If you target a homosexual dating app for instance, and the person you are tracking is reached by the ad, they you can ascertain that they are probably attracted to the same sex.

This is a disturbing finding because anyone can be the victim of stalking, terrorism or manipulation through these new digital means.

What This Means: Even If A Big Company Isn’t Paying That Much Attention To You, Anyone Can

The number 1 thing that protects our privacy in this info-security-dystopian day-and-age is that even though big companies can spy on you if they want to, they don’t because they don’t need to and don’t have the resources to spy on everyone. But even if we do feel an oblique sense of security because of this, this study proves that anyone can spy on you. I.e. even if big companies like Google and Facebook don’t care where you go every Saturday morning, maybe one of these people do:

There would be countless people reading about this study and thinking to themselves: this is how I can spy on this person, and that thought is very concerning (and also a lot of people thinking this specific person can spy on me). But there is at least something constructive to be taken away from this paper–

What This Calls For: Concerned Individuals And Companies Read This

If you find this paper as alarming as we do, as a privacy-conscious individual or as a company that wants to secure its own privacy and those of its customers, you should do the following.

How To Protect Your Individual Privacy Against Online Ads

Increasing amounts of people are using ad-blocking software for security reasons, not just focus and sanity-preserving reasons. This paper is actually just the cherry on top of the ad-block community’s (e.g. r/adblock)’s argument that online ads compromise your privacy and information security. If you were waiting for an ethical reason to block ads, there it is. You can install what is currently regarded as the best ad-blocker plugin for your browser (uBlock Origin) on these pages: Chrome, Firefox.

If you want to be really really secure from desktop ads, don’t use Windows, use Linux instead. This is because Windows started integrating ads into its operating system which is the ultimate OS faux pas, but it’s Windows so most people including us can’t really avoid using it.

Now for mobile ad-blocking (most importantly). You can install ad-blockers on mobile browsers. Firefox for Android and iOS allows you to install addons, which mobile Chrome doesn’t, however an in-built Chrome ad-blocker is in Beta right now. There’s also Firefox Focus and Adblock Browser which you can check out.

The reason that mobile ad blocking is more difficult is because of the abundance of in-app advertisements like those in Talkatone. The no-ad philosophy of software development didn’t seem to make it to the smartphone app, and now in-app ads have become accepted (it’s horrible). Thankfully there are some ways to block in-app ads.

Protect your business’s privacy by installing ad-blockers on all browsers on all computers (they will probably increase productivity also). Then, this is a more paranoid but not implausible point: inform your employees of the security dangers of online ads and not to click links, even to clickbait articles. These links can expose your business to security breaches of the computer virus-kind and although this research paper did not address it, it did show how ads can be targeted very effectively. A scammer, competitor, etc. could target a malicious ad very precisely to your business in order to steal information.

Protect your customer’s privacy if you do web or app development for them. The ultimate form of protection would be not including ads in apps and sign-in websites that can reveal sensitive information about the user. For instance, an Irritable Bowel Syndrome tracker app should not include ads. If you do include ads on any websites and apps you develop, you should definitely look into the ways that you can secure the ad containers to make them less vulnerable to being exploited by people with intentions like the researchers in this study. The steps to do this are technical and beyond the scope of this article, but definitely do some research because this issue is only becoming more pertinent as we move into the future.