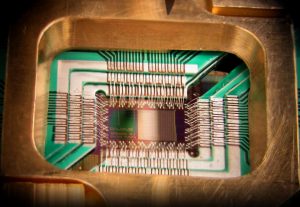 Quantum computers will be the human race’s first real application of quantum theory. It will be our first form of quantum technology, and even the beginning of the Quantum Era. It’s amazing to think that this will happen in our lifetimes, and even more amazing when you find out how bizarre this technology actually is, and furthermore, the vast potentials it has across a number of areas.

Quantum field theory explains the way that matter and energy exist and operate at an extremely small (subatomic) scale. They don’t exist in definite ways. Instead, they have probabilities of existing either of two or more ways. This is called the uncertainty principle, and this nature and behaviour is called quantum mechanics or quantum physics.

Standard Computers Are Reaching The Limits Of Their Potential

In an ordinary computer, all processes and data are reduced to just 1’s and 0’s. In the circuitry of a computer, a ‘1’ means that there is a current flowing through a track on the circuit board, and a ‘0’ means that there isn’t. These tracks combine into switches that perform the most basic logical functions like ‘AND’, and these into modules that perform more specific functions like ‘1 + 1’, and vast numbers of these come together to make a computer work.

The problem is, that as computer processors get increasingly smaller, they are approaching the atomic scale. If one ‘AND’ gate equals one atom, then: How can we continue to make computers smaller and faster, and, If we do, then how can we prevent quantum mechanics from interfering with the way our components work?

Quantum Computers – The Next Step

Quantum computers are designed to work at a subatomic scale and they actually use the uncertainty principle to enhance their (theoretical) computing power by many orders of magnitude.

Instead of 1’s and 0’s (called ‘bits’), quantum computers have ‘qubits’, which are only probabilistically 1 or 0. A qubit could have a 30% chance of being 1 and a 70% chance of being 0 for instance. Why is this a good thing?

However, a computer with 6 qubits will contain 2n bits of information, because of all the possibilities. 26 = 64, 224 = 16777216. Then, these possibilities are used to make quantum gates (like ‘AND’), and the entire computer is built up from there.

How Quantum Computing Will Change The World

Quantum computing is going to be very efficient for large computations. Basically, the different possible states within each calculation allow multiple calculations to be performed at once.

Some of the largest computational tasks that we currently do could each be improved by orders of magnitude. These include:

Possibly the advantage we most look forward to is the ability to model the ways that chemicals and drugs work in complex, realistic scenarios and at extremely small scales. This is predicted to cause a rise and maybe even a revolution in the fields of chemical and drug engineering.

Urban planning could also use these vast modelling capabilities to plan cities that have less traffic jams and bottlenecks. Furthermore, we could control our traffic system more effectively in real-time by connecting our traffic lights to this quantum computer.

Do you ever watch physics simulations just because of how satisfying it is?

You can expect to be seeing a lot more of this kind of thing in movies, and it’s going to look fantastic.

Other processing power-intensive effects that you will be fortunate to experience include detailed lighting and reflections. Some artists are already experimenting with things like reflective fluids, and we can’t wait to see what they can do with quantum computers.

This is one outcome that might not be so positive, but satellite surveillance is going to get a lot more effective. Right now, government satellites drift around collecting vast amounts of visual data on on their own country and other countries, most of which is just chucked out because there is no way to analyse it all. But, if they had quantum-powered image recognition technology, they could detect certain people, certain activities and trends across entire countries. It’s very very concerning for our privacy.

AI is still heavily reliant on software, but, it will get to the stage where the AI’s own intuitions will become more important than the code used to write it, and at this stage, quantum computing will give AIs a supreme boost (quite possibly surpassing human intellect).

Remember how weather forecasts used to be wrong basically most of the time in the 90s? That’s because their supercomputers were less powerful. The supercomputers used nowerdays are more accurate. Quantum computing will give us the ability to compute the weather systems of the world with very high accuracy and specificity.

This is a way that quantum computing will be used in a very un-authoritarian way. Quantum computers could crack our current encryption methods in no time, but, it will enable a new encryption method that will be many magnitudes more secure. It is called ‘quantum key distribution’, and uses the uncertainty principle to….create large amounts of uncertainty over how to crack it.

When Will We Have A Personal Quantum Computer?

From what our current (very initial) quantum computing research is showing us, it seems that the large leaps in computing power will mainly apply to large calculations. For the everyday calculations used in Microsoft Word and web browsing, quantum computers probably wont change that much.

However, we can see the quantum computer being used by corporations, then governments, then universities, then gamers, and eventually, it may be cost-effective enough just to produce all computers with quantum processors. I can’t imagine people not wanting the ability to perform large computations on their computer if they want to, and I can’t not imagine the possibilities if every laptop was quantum. You could have games with truly realistic physics, such as rendering life-like water simulations in real-time. Quantum PCs would also probably be necessary if we were going to have artificially intelligent operating systems or programs.

So when will we have this??? As a very rough guess: 20 years until quantum computers are used by corporations and the government, then another 10 years until they are in our homes. I hope that is the case because honestly, I just want to experience the feeling of using quantum technology and looking at it (it will look like a normal computer) and imagining what is going on inside.