There Are Things We Just Can’t Even Imagine: The Limits Of The Human Imagination

What is the most imaginative thing you can imagine. Try really hard. Make it as bizarre as you can. Make sure that it is absolutely nothing like you have ever seen in your life. Make it as vast and extreme as you can. Exceed all your previous notions of magnitude with this thought. It’s pretty straining right? This was to demonstrate to you, the limits of your own imagination (in not a very rigorously scientific way, but at least a very tangible way).

I thought of: swimming through a sort of dense gas, with giant grass brushing down on me from above and having the weird feeling that this is the only place in the universe, despite the enclosed feeling of this coming from attempting to be aware of the whole vastness of the universe at the same time.

You can see that my example had several, and probably innumerable imaginative limitations. These are just some of the things that I didn’t invent myself: gas, grass, myself, feelings, the universe. Furthermore, I had special amounts of trouble imagining the vastness of the universe, and anything that didn’t involve me as having a human-like experience of the world, existing within a universe with the same basic laws.

Understanding what we cannot imagine is always going to be an attempt to imagine these unimaginable things. You will see from this article however that, after straining your imagination to the furthest extent, at the most we can only imagine imagining these things.

The Largest Thing We Can Think About

The psychology of the way we think about quantities is extremely fascinating. If we see 1-4 objects, we are likely to think of them as the actual number of objects they are. We are likely to think ‘That is four pencils’. If we see 5+ objects, we are increasingly likely to just think of them as ‘Some pencils’ or ‘A lot of pencils’, even if we can easily count them. It seems to be a way for our brain to save capacity, because, in most cases you don’t need to know the exact number every time, and if you do, it is almost instantaneous for you to consciously count them.

Therefore, if we gaze at a city skyline, we almost never think about the exact amount of people or buildings, the number is too large. We are just so used to accepting numbers that we cannot count as being ‘a lot’.

Furthermore, most people have heard the irony that one death is a tragedy, yet 10,000 deaths is a statistic. It’s a function of the same principle, that we are just designed to treat large quantities with a sort of flippancy in our minds.

The reason is, that with the quantity of 50, it takes a lot of mental effort to contain this in your head. If you try to actually hold the number 50 in your head, for instance by using dots, so 50 dots, it will be very difficult if not impossible. You have to go through and count each one, placing it in a 510 mental grid of dots and at the end you may have a clear 510 grid of dots in your imagination….or you might have a half-forgotten smudge.

But that’s only 50 dots. Now you can see the absolute impossibility in comprehending something like the size of the universe and Graham’s number.

But there are way larger things than the size of the universe…. Take Graham’s Number, which is so large that, literally, literally, if you were to comprehend it, your brain would implode into a black hole. Don’t believe it, watch the Numberfile video:

The number is so large that it requires a special notation that the video explains, and also my other article but this is it:

The entropy of this number within an area the size of your brain would be so great, that it would create a black hole. So, not even psychologically, but physically, your imagination is limited from ever comprehending this number.

So what is the largest thing we can think about?

The most complex thing we can think about may be the number of dots you can hold in your head at once. Then again, this is just my theory, I’m sure it is psychologically complicated by heuristics and different types of information

The vastest thing we can hold in our heads is possibly the size of our suburbs, because we have driven across them so often. Maybe someone who continually drives across the country for their job, like a truck driver, is able to comprehend a vaster area.

The Most Creative Thing We Can Imagine

Try and think of something that is completely different from anything you have experienced through your senses. It’s impossible. You can’t imagine anything that’s not like a planet or any kind of living thing or anything hot or cold or anything in between or any of the colours. This is a limit to the imagination but, does the limit reside within the imagination or within the universe?

It is very hard to answer this question, but we can make a good case for it being within our imagination. Basically, as it stands, we cannot imagine anything that we have not experienced, because our imagination is something that kind of rehashes memories in new ways. However, is this because we have virtually experienced every possible basic thing in the universe. After you have viewed a dot and no-dot, you can’t imagine anything else because only these two possible states are logically possible.

It is true that there are logical limits to our imagination. That is a limitation, but we can’t say that it is the universe’s limitation. While our brain is made of atoms and abides the laws of physics, that doesn’t mean that it can’t be used to construct a system that obeys different laws. Turing completeness in computer languages demonstrates this concept, even though it could be said, philosophically, that all the things that we can model are still within the universe’s laws. But anyway, the strongest point is that we know that people who are blind from birth think and dream without colour. They have never experienced colour and have no comprehension of it within their imaginations.

So what is the most creative thing that we can imagine? Some would say that the highest works of art are those which rehash the artist’s experiences in the most novel ways. Take “Starry Night” by Vincent Van Gogh. The way that he twists the sky into a spectacle and uses upside-down hanging hair as a focus point is bizzare, and yet none of those things (sky and hair) have we not seen before. It is just extremely imaginative the way that he saw to use and combine them. 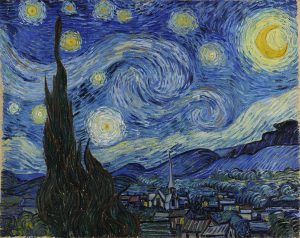